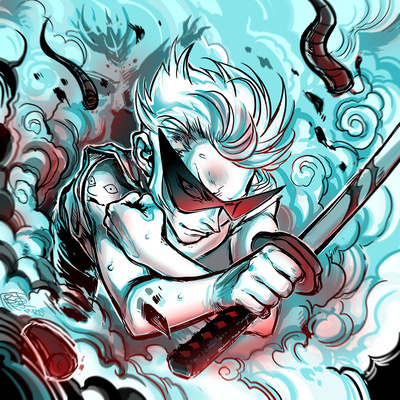 art by P-RO at nomorepros.tumblr.com. P-RO always does a maximally amazing job so why I asked her to draw the art is a non-question.

Stress is actually a pretty faithful arrangement of an original track by Buzinkai. Buzinkai has been responsible for several HS-important melodies like Doctor, Endless Climb, and Explore and [her] work, for me, has always established a certain “essence” of what Homestuck is. My goal for this piece was actually to create a classic strife theme for Dirk with the core feeling of earlier pieces like Showtime or Doctor, so basing the piece off of something with that “essence” was important.*

I can’t say why Buzinkai wrote this piece the way she did, so I’ll instead highlight the differences between the original and my arrangement.

About the similarity to Teal Hunter and a fun syncopation lesson:

Wow, I really got off track here. But I hope you learned something today.

* Yes, Bill Bolin also started an arrangement of this piece before he left the team. I think we were both attracted to the same “essence” present in Buzinkai’s piece.

** Bonus challenge: See if you can count out how I divided the measures in this song! If you can do this, you can easily understand how to compose in time signatures like this. It’s actually VERY simple and derived directly from the other breakdowns I did.