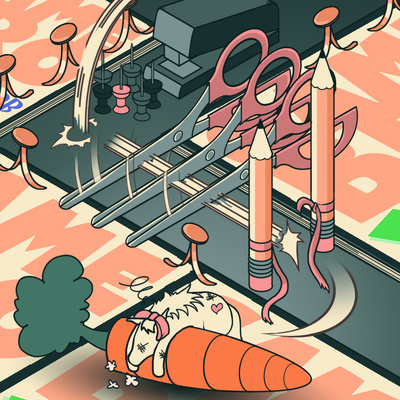 I get the feeling that down the line there will be an explanation for why exactly there’s a tiny Maplehoof on Dirk Strider’s desk and it will be one of the biggest plot revelations in all of Homestuck. For me it was a cue that there needed to be a Sburb Alpha universe parallel for the song Maplehoof's Adventure, which in itself was a spiritual sequel to Pony Chorale. It’s sort of a reality check to realize that I have written not one, not two, but three songs for cartoon ponies now - I guess that’s part of this disease we call the Internet.

As with the previous installments, I used a sample of Tavia Morra saying “neigh” to punctuate phrases, this time sped up to about double speed to have that chipmunk-esque effect. Everything about this song is a bit faster-paced and squeakier to reflect the stature of the tiny horse. The orchestration was largely inspired by my last trip to Disneyland - the whistles are arranged to sound a bit like the teapots from Alice in Wonderland, and the horn synths were selected because of their resemblance to a merry-go-round organ.

Along with recent tracks like Another Jungle and Elephant Gun, this song represents one of my attempts to stick less closely to a predictable song form. The key signature moves up a whole step around 32 seconds in and never comes back down, and the main repeated refrain that ties the song together is the little cadence that shows up at the end of each section. I stuck to my guns as a high school music theory student on this one, mostly drawing from Mozart and Sousa - it’s an overstimulating mess of counterpoint, and my main goal was to see if it would annoy composition major Erik Scheele (it worked).

Out of all the tracks for Volume 9 I worked on, this one was a real breeze. I was on such a roll that I considered making it ten minutes long just to piss off everyone, but I knew that I’d most likely be asked to cut it down if I’d gone to that kind of excess, and I had other tracks to work on.

The track art was done by Tavia Morra.

Bowman and I quickly settled on the idea of a picture emphasizing the size of Minihoof, but couldn’t decide on a specific way to show it. Maybe put a magnifying glass over the little pony? Having her next to Dirk’s hand while he typed on the computer? The energy of the track made us think of little Minihoof running through an obstacle course Dirk set up for her on his desk, thus the stapler, the tacks, the brads, the pencils, and the GameBro Magazines. This was a super fun one for me since I had such a personal investment in it.