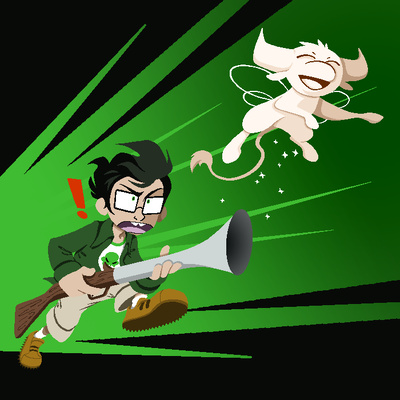 This is pure Jake strife music - I started this project with the definite goal in mind to make something that sounded purely like video game music for a battle. Jake English is sort of the archetypal Roosevelt-type swashbuckler with all the bravado of a turn-of-the-century primitivist. For him, the palette of sounds is instantaneous: heavy percussion rumbling at a breakneck pace. I threw in chimes, timpani, xylophone, glockenspiel, cymbal crashes, and an uncompromising drum machine to get the atmosphere I wanted.

I had a nice, retro-sounding portamento synth as a lead, a quick little intro, and a couple of smart little themes going on right at the beginning, and I was all set for this to be one of those simple, memorable themes not unlike one of the previous Strife themes (“Beatdown”, “Showtime”). Then, at 44 seconds in, something snapped - I suddenly decided that what I was writing was boring and that nothing could be normal from that point on. Inspired by a few listens to “Rollo Interior”, I wrote a rhythmically unconventional breakdown followed by the whole song shifting into “Zappa chords” for a little while.

What was excellent about working on this track is it’s one of the first instances in a while where I had really freed myself from any preconceived goals for the song’s form and just decided to write a track from start to finish and see what felt right. I ended up at sort of the golden length - the song begins to loop at 2:15, making it still functional as video game music, and fades out by 2:39. Tavia pointed out to me that pop songs that run a bit short of 3 minutes tend to be incredibly satisfying, especially for a first time listener, as they ask for your attention for an amount of time that doesn’t wear you down. Out of all my tracks for Vol. 9, this is the one I find the easiest to listen to on a loop.

The track art is by 8bitkitten.