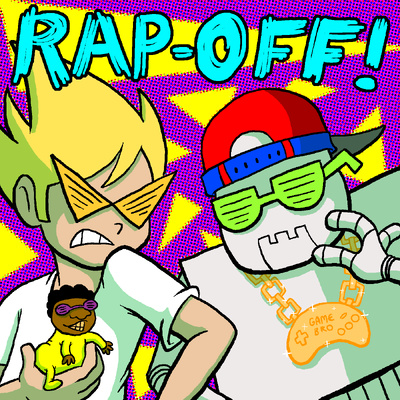 That’s right! It’s time to talk about Anbroids 2.0! Hands up everyone who thought “Brobots” would’ve been a better name? Yeah that’s what I thought… Still! Here we are so let’s commence the proceedings:

So much of the inspiration here comes directly from Davesprite, which I remember thinking “Oh god damn if that Yamaha YM2612 Genesis/Mega Driveness doesn’t fit Dave quite well!”. Enter Dirk Strider and his robotic creations! Suddenly a synthy, retro chiptune doesn’t sound so out of place.

My idea was formed fairly early on after we’d learned a bit of his pastime. I came up with the idea of having a kind of “Workshop” theme where Dirk would put some music on and get to work constructing some brobot or other. From here there was a number of prerequisites:

All this in mind, I nabbed a general purpose Genesis soundfont (Which seems to be comprised of voices mainly nabbed from Sonic, certainly the percussion is - You should be able to recognize the snare from the opening riff of Sonic the Hedgehog). And got to work.

Yeah, so I thought “Brobots” would’ve been a better name, especially because that became their canon name in the comic, but by then Hussie had used it in the comic under the name Anbroids, so it stuck :p I apended a 2.0 on it because the versions became fairly different. I also figured some people might want the original version 1.0 used in the comic after the album came out.

[LISTEN TO] IT HERE!

This was an in progress version that Hussie nabbed early on before I’d made changes to create the newer version. I’ll go into why it changed in a bit, but here’s a good place to discuss the track at large:

The main theme is there, but a bit… “Lazier” - It doesn’t have a lot of the swing it’d later develop. It also opens with just a percussive riff, which is probably most influenced by the likes of Toejam ‘n Earl. Overall I reckon this version lacked energy, so it needed a bit of a rework before I reckoned it was cool enough to be a Strider song…

The percussive intro was removed in favor of a “Booting up” thing (Just a pitch bended squave), followed by a not-so-subtle parody of the original Game Boy bootup noise. The main “guitar” riff came back with a bit of stereo (Which I tried to use a bit more of).

At 0:23 we jump into the first of various solos. One of the tricky parts of chiptune music is, yes you have limited channels, voices and often no polyphony (multiple notes on the same track at the same time) so if you want to make it sound realistically retro you need to abide by these laws, but that doesn’t mean you can’t play with pitch, modulation, stereo etc - The solos were effectively a lesson in mucking about with these to create something that sounded fairly dynamic for a sequenced solo.

At 0:40, just before the main melody kicks in, we have the first “boot error” sound - Just a flat bass note on the square. There’s one at the end as well - The main concept was while he’s building these brobots, occasionally something’ll go wrong - It’ll fail to start or it’ll start going haywire - and so he has to unplug and start again trying something else.

0:43 has the main melody. It’s similar to the original Version 1 but it’s been funked up a bit - Mainly to avoid it sounded like other stuff (I’m looking at you, Lady Gaga’s Alejandro). Again, bit of pitch wobbliness to give an air of a kind of hectic, technological mess.

The second solo changes the key, and here the idea is Dirk’s moved on to working on something else. As the solo continues, it gets more and more hectic until it’s just splattering notes everywhere, like the brobot’s gone completely off the rails and it’s flailing around the room - At 1:35 it’s promptly shutdown and we bridge back into the main melody again (This bridge was removed from V1, but brought back in by, well, Rad’s request :p I liked it too though, has a Sonic-y feel to it).

Bit of harmonizing later (partially indicating that the Brobot Dirk’s working on has started to play ball and is synchronizing with his personality). One last “Perfected” solo (1:58) which is actually a modified version of the original solo that’s basically a lot “wilder”, to show we’ve finally perfected the upgrade and ready to ship.

So with that, everything’s shut down, and the song ends.

Granted, I probably didn’t manage to get this little ‘story’ across with everybody, but this was the general thought process when I was making the thing. Hopefully if you listen to it now you’ll get some of the ideas I was going for. If not? Well… enjoy it however you like :p Or even come up with your own interpretation that’s better than mine :p

Johnathan Griffiths was the track art man of the hour - There’s even a mega drive controller there! And how are those shades staying on? All round awesome :)