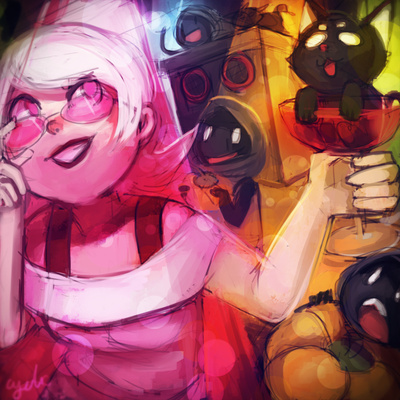 Aaah Pumpkin Party in Sea Hitler’s Water Apocalypse. Or Pumpkin Party in Colony 413 or whatever I was calling it before I decided to go nuts. The original working title was just “Pumpkin Party”, so at the very least we started somewhere sensible.

So let’s have a chat about where this one came from.

So around about THIS PANEL during Dirk’s history lesson of the future, we got a glimpse as to what Roxy was up to - Helping the locals out in the post apocalyptic hell-future. Some bizarre idea came about that herself and the Carapacians would get together and have a little underground party away from the watchful gaze of the Condensce and her drones and the like. Gotta find some way to keep your spirits up, right? So with that incredibly vague concept the idea was born to come up with some small light of goodness and happiness in, well, “Sea Hitler’s Water Apocalypse”.

As mentioned this changed a few times, but this line sums up pretty much everything you need to know about the future:

As I recall, with this one it was mainly the instruments chosen that defined it. The Banjo just struck the right kind of sound, and from there an accordion to give it a bit of a polka feel. A lot of the crafting of this one was trying desperately not to have it ending up too much like the Ievan Polkka (Which thanks to a month of Project Diva on PSP is firmly embedded in my brain…).

The idea of mixing Chiptune samples and real instruments is something I was playing with a lot this album (Encore does it as well, as did the dropped ‘Mother’) - I felt this was a kind of neat “This is where we were, and this is where we are now” concept. HS is still about a game, and it’s neat to embed some of the more obvious gamey elements now and then. Plus it might just be me, but accordions and square waves go really well together :D

The “Ooh!” “Ahh!” chants were added just to give it a bit more of a folk appeal, and the air-raid sirens were added last to build up the scene of this party going on while the world’s gone to hell outside - perhaps some other colony’s getting obliterated for whatever reason. Either way, it bookends the song quite nicely, coming back now and then and returning at the end to signify the dance is over.

My favorite bit of the whole thing is the solo at 1:56 - It’s just so gosh darn happy!

Overall though? It’s a bit of a zany, dance-party track. Completely juxtapositions the hell-nightmare outside, and in the end that’s the point! Of course things get worse, but “Red Miles In Sea Hitler’s Water Apocalypse” will have to wait…

Damn, I just realized I should’ve added some meows. I’ve got like two cats sitting here ready for a vocal performance as well… Ah well, the road not taken.

Once again the art is very spiffy so many thanks to Marina! Look at that dude in the corner? That pumpkin is so nom’d! :D