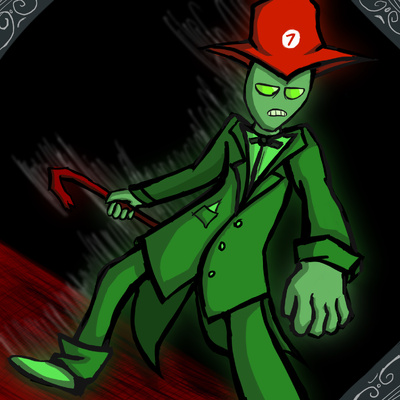 I always figured "Juju Breaker" would be a cool name for a song, so I kept that name in mind and centered the feel of this song aorund it. It's a track about Crowbar, but more specifically Crowbar's crowbar. Its long chronology goes nearly entirely under the radar, as does the smooth green mobster named after it. Think of this track as a means towards rectifying that.

The song was made with a particular narrative in mind, with each section of the song signifying another step in the juju's journey. Crowbar leads the Felt on Alternia, crowbar in hand. Slick steals the crowbar and opens the Felt vault, distorting spacetime. Kurloz finds the crowbar in a memory and hands it to Gamzee. The meteor reaches B2, and the crowbar is given to B2 Jack Noir. He destroys his prison, then fights some kinds and himself on top of a building. He and the crowbar are sucked into a black hole. The juju is thus brought to a dead Earth. Gamzee again hands the crowbar to his lord, Caliborn. With the crowbar in his possession, Caliborn trudges through his Sburb session, planet by planet. He builds an ensemble of loyal leprechaun people, including Crowbar himself. Finally, the crowbar is given back to Crowbar, who will later lead the Felt on Alternia. With so many diverging timelines in the intermission alone, we are left to guess whether the cycle will repeat again, or be cut off.

You know, the great thing about Homestuck is that a lot of panels are so iconic that Hussie more or less traces over them to make a new panel, and it still looks great, and people love him for it. And this self-referential quality extends to fanworks too. Makes my job easier.