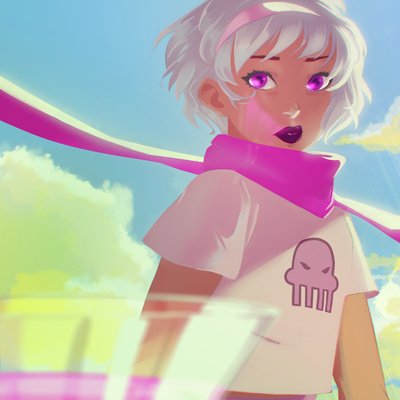 I’ll never really know what happened to produce this. Not really, never. I wish I could remember if there was some thought process behind it, some sort of inspiration, but I really can’t remember any. Most likely, that was for the better.

What I mean is, I used to do a lot of improvisation after theater classes, instead of practicing, while my mother would clean up the various classrooms that were used. There was never really any inspiration for things that I can remember, and they were just a lot of off-the-cuff experiments of a sort, I guess. Some probably turned out great, and there were probably more than a couple days where nothing happened. I can remember trying to emulate different video game soundtracks or bits from them, but that was never really a norm. The only thing I’d ever think regularly was how no one would ever actually hear the improvisation I was playing, and I was okay with that. This was before college, anyway.

My point is, improvisation rarely had a point, so it’s really impossible to nail down if there was any reason for playing Sarabande that night. The way it went about, I just played the piece, exactly how it was recorded, aside from one little mistake. Then I stopped, went “Okay yeah, that was good”, packed up, and left. A while later, I needed to play things for the composer concert, so I performed it from memory, and that’s where the recording came from.

It’s kind of gained a status among the fandom for being music for when John reads Jade’s letter, which I think is a rather good place for it to go. Although, I think I actually called it “Rooftop Waltz” at one point, for Rose/Dave shipping stuff, buuuuut I’m rather glad that the “purpose” and title is changed now. “Rooftop Waltz”, that’s such an awful cheesy love title, plus, the piece really is a sarabande. I mean literally, it fits the genre fairly well, plus my composition prof called it “a perfect sarabande”, so there we go.