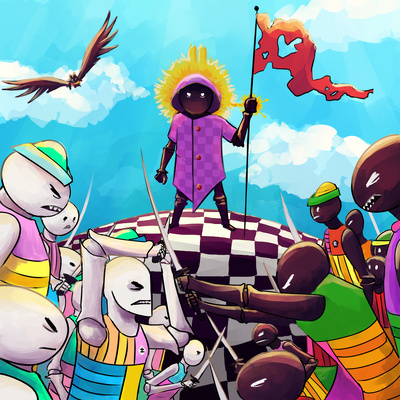 Skaian Skuffle was made with the intent of turning Skies of Skaia into a battle theme. The bass progression matches Skies of Skaia's, with more bounce to it, and the melody of Skies of Skaia was quantified/simplified into a repeating motif. It was mostly composed by feel the rest of the way. I actually had writer's block for a while after I reached about 1:02, and it never really got resolved, which is why 1:21 onwards feels kinda awkward and not so great. I kinda wish I could go back and redo it so it sounds better. But what Radiation did with it turning it into Skaian Skirmish worked really well. There was some vague artistic direction from the Big Man that helped with this a little bit. If I remember correctly, it was something along the lines of "okay, maybe you can bring it down a bit in the middle, then ramp it up for the big finish." So I tried to do that using a new bassline, using wandering skips of third and fourth rather than downwise step in an attempt to mirror Skies of Skaia's original melody, as well as scrambling the repeating sixteenth note motif based on the original melody. Like I said, though, I would say it worked out awkwardly rather than well. It does create a certain mood, which, like I said, Radiation capitalized on. Whoops, I just repeated myself, but in more detail the second time. What's that called in literary device terms? Amplification? Yeah, let's go with that.