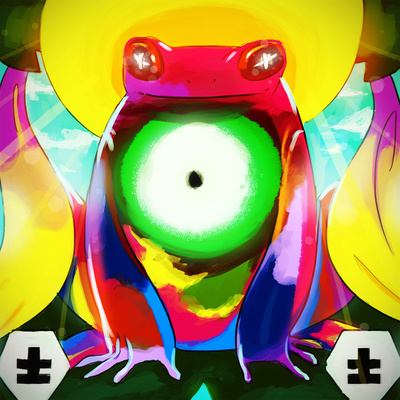 Tracks that Our Glorious Speaker references:

Tracks that reference Our Glorious Speaker:

Much like Pondsquatter, the concept for this piece was conceived very early on in the album’s life before it became Genesis Frog. It was supposed to be a theme for the Prospitians, and it still mostly is, but now the piece focuses more on their devotion to the Speaker than the citizens themselves. The chess-people of Prospit are referenced a few times in Homestuck as worshipping the Genesis Frog, and it is through perusing their lore in various updates (mostly Seer: Descend) that I got inspiration for several tracks on the album, including this one.

The music was representing devotion, so I wanted it to have the warmest, most tranquil tone it could. There are two chorale-like sections, the first being the passage the strings play in the beginning, and then later in the brass when the rest of the orchestra drops out for a while. The style of this piece was inspired by Taku Iwasaki’s scores, which often feature very beautiful and lush string textures. I actually don’t think I captured that very well, and in fact strayed from that idea as the piece went on. But the core of the inspiration remains and I think one can tell if they are familiar with his style. Of note is the last third of the piece which is a self-indulgent, overly-romanticized arrangement of Erik Scheele’s Sarabande. It’s such a beautiful piece and I knew from the day I started working on this that I wanted to include it, no matter how schmaltzy I made it sound. Give me a break, it was fun, okay?