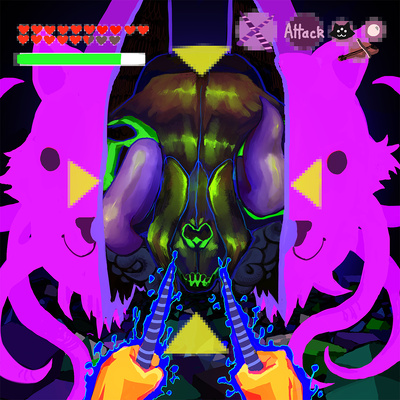 I've always considered the creation of this song a "classic story". It came about in a strange, almost fateful way, and I think the final product reflects that. It was the first thing that Radiation and I worked on together, and it was through Hardchorale that our friendship started. He approached me with a MIDI file he had made, intending it to be a sort of "boss battle" arrangement of Chorale for Jaspers in the style of Harleboss. He asked if I would be interested in producing it, since at the time he was just starting out and had no means to do so. I agreed, Chorale being one of my favorite Homestuck tunes. So I produced it in a DAW to make it sound "good", and relative to the MIDI file it sounded great, and we were both really happy with it. Radiation got Bowman to record some heavy metal meows, which he apparently almost got kicked out of his apartment for recording and claims to have video of, though I have yet to see it. Once I found out it was going to be on Vol. 5, I added a section to it (roughly the last third of the piece) and at the very end sneaked the Squiddles theme just because I could. I realize that was more of a narrative than a commentary, but it's the history behind this piece that I find fun to talk about more than the piece itself.