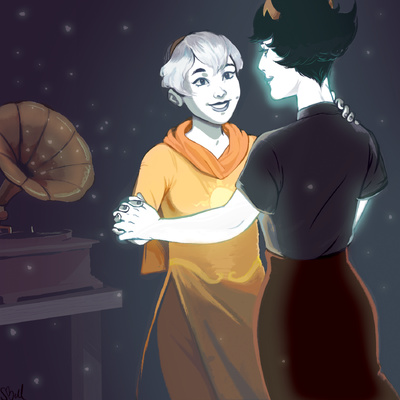 Tracks that Lilith in Starlight references:

Tracks that reference Lilith in Starlight:

This track's actually effectively a second go at a previous track I made called "Mother" which blended Black Rose/Green Sun & Aggrieve in a sort've more mystical tone.

It focuses on the more fantastical elements of Homestuck, like vampires & wizards & eldritch horrorterrors from the furthest epths, and I envisioned Rose & Kanaya milling around the Troll library during the timeskip, reading up on ancient lore and having a dance together.

There's a little bit of Enya influecne sneaking in, particularly with all the humming choirs, and then halfway through we go into a bit of Yasunori Mitsuda inspired celtic dance and a little excerpt of Darling Kanaya before slowing down and ending on the Aggrieve melody again.

When Malcolm told me this was a Rose/Kanaya piece I got hung up on the idea of them having a little dance together in the meteor library. I figured it would be a sweet way to demonstrate the darker, more elegant aspects of the song and its liveliness at the same time.

I chose to have Kanaya as the lightsource to put a little more of a literal spin on the title-- Rose as Lilith and Kanaya as her starlight.

Just the two of them in their own little world, sharing a romantic moment!