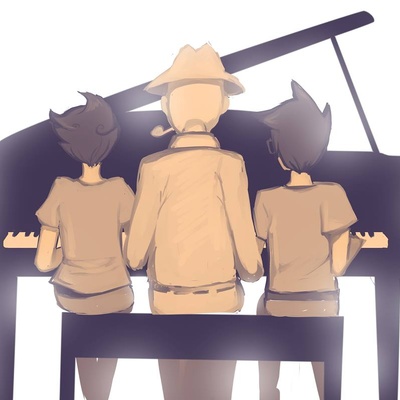 Wow. This piece was a huge undertaking that started back when I first played Eden sometime... last year I think? I really connected with James's piece, so much so that I made sure to let him know (and continue to let him know) how easy and intuitive it felt to play. I experimented with it, transitioning into psych0ruins, and then into Doctor. Being heavily inspired by Konec0's dance medleys, I thought to extend the piece, and extend it I did. Up until the Walk Stab Walk / Earthsea Borealis section was all ad lib'd on my piano, as I picked pieces I thought I could move between, and beyond there I wrote original scores straight into Sibelius which I could barely dream of playing. This piece developed into what you hear today, including the seret ending! I hope it moves you, as all of Homestuck's music has moved me. Enjoy listening to this 31 song medley! Some day I'll learn to play it.

A 'quick' fact, I had planned to continue the Killed By 8r8k Spider section through over the top of the Unite Synchronization ostinato, but when I played back the section after the high G, stacatto F into the ostinato, I felt a powerful urge to just get straight back into the final version of Eden, which was written on whim straight into that 4/4 pattern and more fluidly in B minor. It feels like a new life has been breathed into Eden because of it, and I'm so happy to be the man to have done it!

scoot did piano
i drew piano