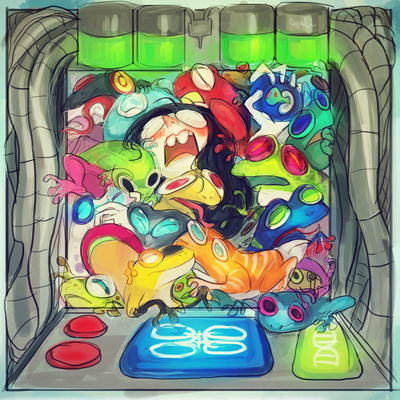 GA: But Regardless I Think Our Roles Are Approximately The Same Since We Are Both Stokers Of The Forge
GA: As Well As Holders Of Breeding Duties
GA: However I Should Clarify That My Earlier Counsel Was Mostly Academic
GA: It Takes Weeks To Do All Of It Properly
GA: You Wont Have Time
GG: breeding duties?????

This entire piece was inspired by Kanaya’s awkward phrasing. It’s a great line, and Jade’s dumbfounded reaction is even better. Naturally I wanted this to be an awkward-sounding piece, so in the beginning there is plenty of pizzicato strings, strange pauses and the like. Of course, more thought went into the mood than that; Jade has a small association with witches, even if it is only in title and costume. The idea that she is the Witch of Space and is dabbling in ectobiology with frogs put a lot of images in my mind, the most obvious connection being a witch’s cauldron. How would this type of music sound, exactly? Eventually I settled on the sort of faux-baroque feel mixed in with plenty of silliness, since this is a piece about Jade and frogs, after all. The orchestration is full of fast-decaying timbres like the aforementioned pizzicato and liberal use of harpsichord. I also included celesta since it adds a sort of whimsy to the piece, and it has the added bonus of calling back to the beginning of the album.

The main motive is a very baroque sort of device, and I used it that way a little, though I mostly put it in ridiculous contexts. The opening is very stately and lively; what a way to open the last third of the album! But after the first phrase it immediately drops out into a very spacious world, and it is during this section that I explore a variety of colors while playing with the motivic material. Then I prove how short my attention span is because the music goes a lot of places fast after that. First it takes a sweet tone with a celesta melody, and then feels majestic with a lyrical cello line and a call in the horns. If you were to think about this piece programmatically, then that might be the moment when Jade finally successfully breeds the frog with the right genes. In which case the rest of the piece is about hundreds of frogs hopping around or something, which is an explanation I like, but will not officially state since I wasn’t actually thinking much about a story when composing this.

But still, I did have a lot of scenes brewing in my head with this one, so I think it is totally appropriate to imagine a story going along with it. Anyway, the majestic section cuts off for a few seconds, then a booming section based on the opening stumbles in and leaves as fast as it entered. From that point on the material from Pondsquatter comes in and is given the same feel as the rest of this piece, and if there was any one word I had to describe this last section with it would be, “shenanigans”. Incidentally, I consider this and Great LOFAF Expedition of 2009 to be the heart of the album. There will be more on that later in the commentary.