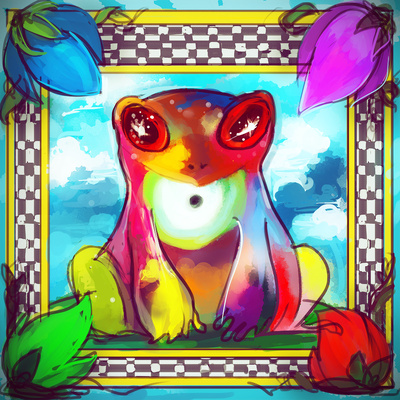 Out of destruction comes nothingness, and the only sounds are sparse and atmospheric. The nothingness persists for a bit, a result of the universe’s destruction in the previous track. If I were feeling really dark I could just end the album there, but I wanted there to be a sense of conclusion and returning to what once was. What better way than to have the music rise from the ashes and the solo clarinet come back to play a new version of the Pondsquatter theme? The idea behind the countless Genesis Frogs is that they propagate one another, each frog producing the next, and behind this lies the idea of infinity and repeated processes. So I wanted the album to do a Mobius Double Reacharound as it were, and end as it began. So the pairing of Speaker and The Vast Croak echoes the earlier pairing of Prelude and Pondsquatter.

This piece even has the same structure and general idea as Prelude before going into a full statement of the modified theme. As a result it is difficult to talk about its composition, since it is virtually the same as Prelude only with varying material. The clarinet emerges out of the atmosphere just as before, and a texture-based section builds this time not into a false climax, but into a fuller orchestration of what the clarinet was doing earlier. It ends simply and quietly in the woodwinds, allowing the next and final track to proceed with its exciting start.