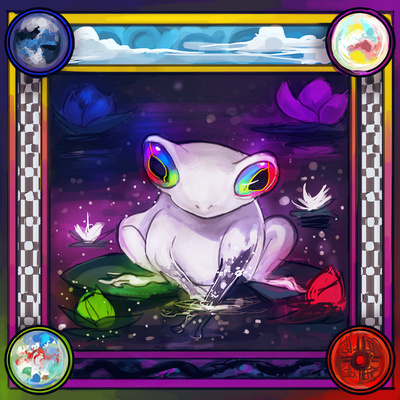 If Genesis Frog were a game, this would play at the title screen. It is a full realization of the album’s main theme, this time with the entire orchestra in tow and plenty of thematic development. I sort of have a love-hate relationship with this track. For one thing, it is the first piece I composed for the album and its melodic material served as its main groundwork, so it’s really important in that respect. But at the same time I had the least experience while initially composing it as compared the album’s other tracks, so I had to spend a lot of extra time fine-tuning it and developing it more (the original was barely under two minutes long). Still, considering the amount of work I had to put into it, it was one of the more rewarding tracks to work on.

The combination of Prelude and Pondsquatter to open the album with is something I thought about a lot, and in many ways they are one piece split into two parts. Consider this Movement II. Pondsquatter flows right out of Prelude and gradually adds to the orchestration. After a brief celesta interlude, the theme gets going in full. This piece has a sense of emerging, particularly out of the empty space of Prelude. There are plenty of woodwind trills and harp runs; I wanted them to feel like they were bursting out of the texture, and the openness of the quartal harmonies was eventually replaced by more triadic chords. Quartal chords retain some significance through the album, however, though they are certainly not prominent. I aimed to make the climax of this piece very satisfying, with the gong practically screaming “we’ve arrived!” but I was afraid of having too much of a sense of finality so I didn’t give the piece a proper ending. Instead it goes straight into the next track without only a hint at a cadence.