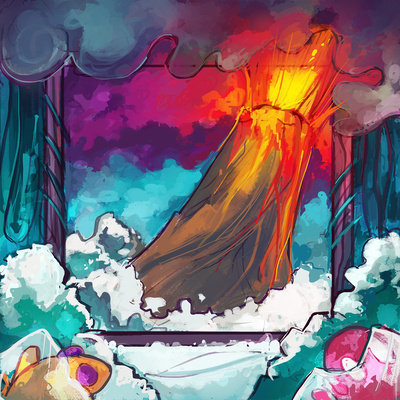 Tracks that Stoke the Forge references:

Tracks that reference Stoke the Forge:

Why did I compose this piece? Well, mainly because I wanted something bombastic to use an anvil as percussion in. But I also wrote it because of its importance in the role of each Space player’s planet and their frog breeding duties. Not only that, but it acts as a transition from the darker Breeding Duties to the lighter, more energetic Great LOFAF Expedition of 2009. More specifically, it extends the idea behind Thip of the Tongue to three tracks instead of one; it is a progression from the planet’s frosty beginnings to a sudden and beautiful spring, and this piece heralds that moment. In any case, I ended up with a pretty fun piece that may not be the most impressive on the album, but it definitely serves a purpose and keeps the flow intact.

The piece opens with a brass fanfare based off the Folklore theme interspersed with anvil and bass drum hits. The decision to feature the anvil came from Dave’s denizen, Hephaestus, who is referred to as “Lord of the Forge” with little explanation other than he desired access to Jade’s Forge to repair the Caledfwlch. In fact, the entire piece has the feeling of hammering, since harsh gestures in the brass and strings are common in combination with liberal usage of timpani and bass drum. The entire piece is in Dorian, which is a mode I can rarely resist composing in, and it lends a big sense of adventure to it. Formally there is not a lot going on, other than a melody being repeated several times with different orchestration and transposition. An interesting moment occurs when the entire ensemble drops out and a flute solo comes in playing a lighter, more humorous version of the tune before heading towards the climax. All in all, it is a pretty standard theme with a solid tune despite the fact that nothing extraordinary happens for its duration. But hey, we wouldn’t want overkill would we? I was saving that for the next track.