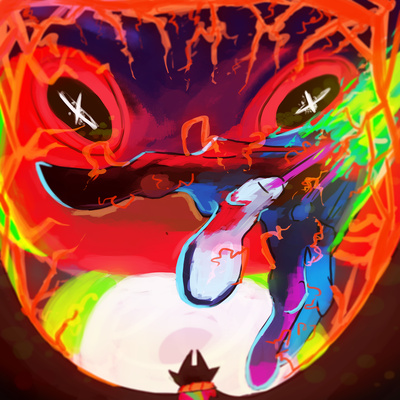 Poor Bilious Slick. Every iteration of Him we’ve seen in Homestuck has been brutally murdered in one way or another. As if that wasn’t enough, He is primarily known by the spiteful nickname Dersites have given Him. In composing this album, I would have missed a big opportunity if I didn’t take material from those in Derse that oppose creation, most specifically Jack Noir. The title of course came from the name Bilious Slick, but it also has the benefit of adding grotesque imagery to a piece of music about Jack slaughtering a giant universe frog. It is a continuation of The Temple’s Withered Bloom, and it picks up where it left off with Jack exiting the Lotus Capsule, escaping the session and eventually going on to destroy the universe he emerged from.

The piece opens right away in 10/8, and an electric guitar, bass, and drum set are added to the ensemble. I decided that among the pastoral and bouncy, lighthearted pieces in this album, there was no single track that felt like a hook to me. I wanted to attempt to compose something that just plain kicks ass, some climactic piece that could act as a reward for listening through the relatively calm album. Naturally I came to the decision to include guitar and drums and let more rock influence come through.

The theme is based on the Folklore theme, which I thought was appropriate and somewhat ironic, since what represented creation before was now being used to represent destruction. The guitar takes over the melody as the meter goes through several changes, and after several consecutive contrasting sections that play with different motives, the guitar once again begins the next section by establishing a triplet ostinato.

At this point I figured, what the hell, I’ll quote Black. It actually fits quite well with the “Jack” device from The Temple’s Withered Bloom that I bring back here, thanks to the fact that they both emphasise on the tritone. My own Jack motive begins to take over from Radiation’s, and eventually the strings are playing it in canon as it gets more and more chaotic, until everything drops out and the lower piano register begins an ostinato based on it. The orchestra builds again into more chaotic textures, the tension drops briefly, and then the theme is recapped as the climax. All in all it is probably the most exciting piece on the album, and for my first foray into more action-like music, I think it does its job well.