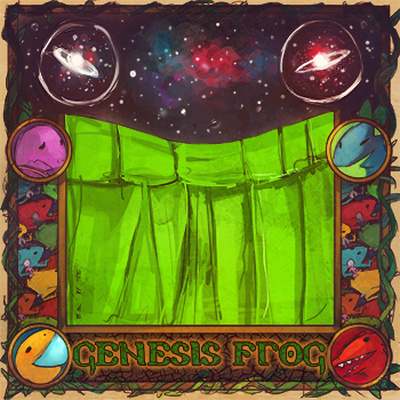 This covers the Frog act of the album. One more Part to go after this!

After a lovely intermission from the Consorts, our story continues. The sequence of tracks was very carefully chosen for this album, and it is especially true here. Every track from here on out details the journey undertaken to create the Genesis Frog, as well as its ultimate fate. From the ectobiological breeding (Breeding Duties), to the unfreezing of the Land of Frost and Frogs (Stoke the Forge), to the hunt for frogs (Great LOFAF Expedition of 2009), to the mysteries and certain doom hiding in the frog temple (The Temple’s Withered Bloom), and finally to the destruction of the universe (Bilious), a story is told through music. As a conclusion, we bear witness to the fate the Genesis Frog is meant to fulfill: finding His pond in Skaia (Speaker), and signifying the creation of a new universe (The Vast Croak).

This intermezzo changes the tone from the lighthearted Consort music to something more full of wonder to suit the story to come. It is a simple swell based on the Pondsquatter theme, and once it settles down, the texture becomes very sparse so as to lead into Breeding Duties.