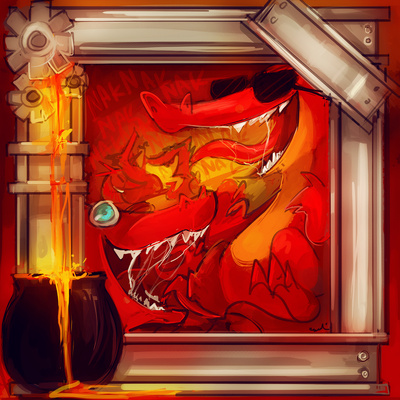 Where do I even start? This is one of my favorite tracks that I’ve made, and by that I mean to say I’m really amused I was able to come up with this in the first place. It originally wasn’t part of this album at all—it was supposed to be a short jingle for the LOHAC Stock Exchange! But it was too much fun to let go of and soon it morphed into a full-fledged character theme for everyone’s beloved, excitable consorts. The general idea behind the music was this: Jit may have made a silly arrangement of Atomyk Ebonpyre, but what could I do to put it in an even more ridiculous context? And so it was that it became the manic violin and xylophone old-timey television music-inspired (this was my only frame of reference for what I thought stock exchange music should sound like) tune that it is now. And wouldn’t you know it, this type of music turned out to fit the personality of the Crocodiles like a crocodile-fitted glove.

In terms of pacing, I thought it was crucial to place this as the first Consort track. The first four tracks of the album all range from relatively slow to moderately less slow, so I really needed something to break out. This is the most energetic and fast-paced of the four Consort themes, so for my money it was the best choice to introduce this section of the album and keep interest instead of having too many low-energy tracks in a row. However, this isn’t to say I was able to resist the temptation to put a slow middle section into this piece, which provides a little break from all the pandemonium. But more importantly, it set the stage for an incredibly silly idea I had to record a bunch of people nakking like maniacs to sound like the Crocodiles, and then have that gradually crescendo into the last section of the piece.

In what is of some note, I tried to feature each of the Kids’ instruments in their respective Consort theme. Dave’s usual turntable affair was impossible for me to consider for this style of music, though I’m sure some incredibly talented person could have pulled it off. Instead, the piece uses xylophone heavily, since I was operating under the logic that both turntables and xylophones sort of fall under the percussion category? I will admit it’s a bit of a stretch.

I would like to thank the following contributors for lending their beautiful, sonorous voices to this piece of music: