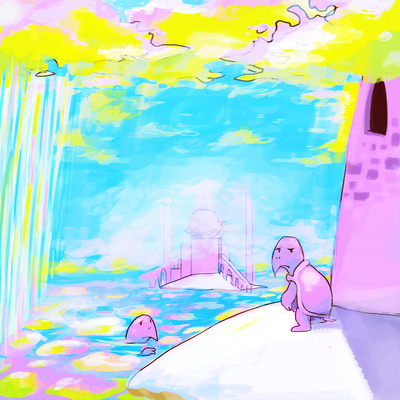 This was a difficult one to compose. The Turtles in Homestuck haven’t been given much characterization other than the ones quaking in fear of Rose, and even then that characteristic is basically the extent of it. I wondered if it was even worth writing a theme for them, since their importance to the story is minimal; what kind of music would I compose for them, anyway? But in the end I decided if I was going to do a set of Consort pieces I was going to do it right and that meant composing the whole package. There was going to be a cycle of fun, lighthearted pieces on this album regardless of characterization or story relevance.

Unfortunately, by the time I decided this I had absolutely no musical ideas. I knew I wanted to give the piece a sort of awkward, wooden sound, so I had a pretty good idea of what timbres I needed (wood blocks, marimba, bassoons, etc.). Then I decided to just outright make it as quirky as possible and added a contrabassoon, even giving it the melody at one point, because hey, I might as well have fun with a track where I’m making up 90% of a character interpretation. Violin was included to fit the theme of the Consorts’ music matching their kids’ instruments. I eventually settled on a tired-sounding little melody, and while it is appropriate it’s the not my favorite one I’ve ever written. You can probably tell too, since it never seems to go anywhere, and when it finally sounds like it is it drops out and a different variation starts playing.

The middle section is a very loosely based on the Pondsquatter theme, and the high register marimba interjection makes it obvious in case you didn’t pick up on it in the first five notes. This eventually leads back into the main melody of the piece, and a couple sequences later it ends. I wonder how much it shows that I was really short on ideas for this piece. Any time it was playing up the comedy in timing or shifting feel, it felt more like I had no idea what to do and desperately stuck something in so the piece could move on. Maybe I’m being hard on it; I still think it is enjoyable to listen to. But from a compositional standpoint, it is probably the weakest on the album.