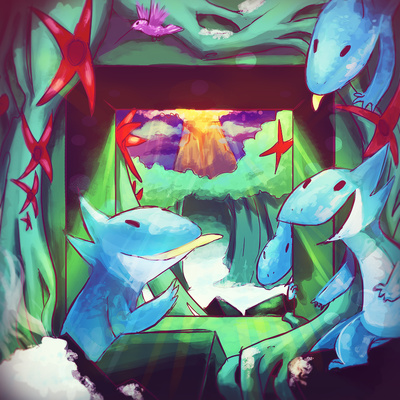 Thip of the Tongue

Tracks that Thip of the Tongue references:

Tracks that reference Thip of the Tongue:

Flashes & games that feature Thip of the Tongue:

If you asked me what title on this album I am most proud of coming up with, it would be this one. Ever since the Iguanas were introduced I was terrified someone was going to use this pun before I had a chance to put it out in an official capacity. I wanted to be the thip king, and despite being nervous about it for almost two years no one usurped my throne. Even as of this writing, searching for that exact phrase on the internet will yield no results. Obviously if you are reading this, that is no longer true. But I digress.

As for the piece itself, I decided to separate it into two very distinct sections. The first depicts the Iguanas’ life in the Land of Frost and Frogs before Jade stokes the Forge (which, incidentally, is the name of a later track which takes this concept even further); the second part depicts their life after the frost has melted away. Due to this structure, the first third of the piece is subdued and establishes a calm atmosphere with the strings and woodwinds, with not a single brass instrument to be found. The opening motive that continues to be used throughout the piece is an almost exact repetition of the Salamanders’ main motive. All the Consort tracks are connected, but these two take it to the next level by building this piece’s base off the main material of the last.

The second part is where things get interesting. It is the only section of the album where I drop the orchestra shtick completely and use an ensemble of recorders, crumhorns, pipes, and an unconventional rhythm section featuring a dulcimer. I thought about what kind of music the Iguanas would make if given the opportunity. I figured they would have a lot of primitive instruments at hand and would produce simple, joyous music. This whole section is unabashedly a tribute to Kumi Tanioka’s work in Final Fantasy: Crystal Chronicles. It’s a sort of re-imagining of this world of ancient instruments that she created, and it was one of my earliest influences. There are also seeds of Yasunori Mitsuda in here; it is such a fun piece that I don’t mind citing very strong influences here if people want to hear similar music to this.