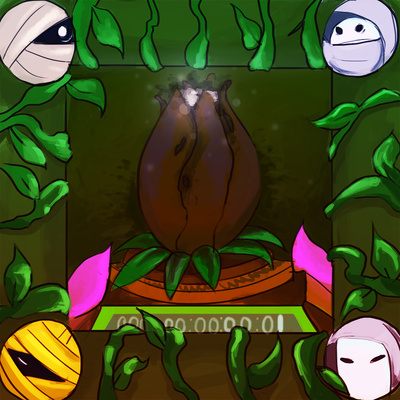 This is an interesting one, since it has probably undergone the most change in terms of concept and musical ideas before I finally composed it in earnest. It started out as a general Frog Temple theme, and all along I had the idea to explore sweeping chords in the strings and choir, which I did end up doing, albeit in a very different fashion than I expected. I tossed around the idea of including material from Jit’s Ruins, then I thought about adapting an old wind ensemble piece of mine. Conceptually I switched from the idea of the Frog Temple to the hieroglyphics inside, tentatively naming it “Temple Walls”, then “Glyphs”.

What ended up happening was that I ended up composing this and the next track as one whole, and then split them into two, so in a lot of ways the two of them combined could be considered a single piece. In fact, I would venture to say the last four tracks on the album could be considered four connected movements among the greater whole, since I added more continuity between them than any previous tracks on the album. Because of the connection to the last track, which is heavily about Jack Noir, I decided to have this music represent the Lotus Time Capsule he went through during Cascade. The lotus being in the frog temple was very convenient for me since I got to keep that idea without straying too much from the theme of the album. So this track ended up being the calm before the storm as it were, representing the menace hiding inside the temple for centuries before coming out to wreak havoc.

The piece opens with a major chord in the strings, as if to continue the train of thought left behind by the previous track’s end. However, the chord quickly changes into something more dissonant, and the tone shifts from light to dark. The choir answers the strings, and the piece progresses in this manner with the two sections being featured the most. A gamelan ensemble plays in the background, very out of tune with the rest of the ensemble, lending to the sense of foreboding. There is a musical device in here that represents Jack, a descending line that implies a tritone. It comes in quietly and at irregular intervals, indicative of the murderous asshole lying in wait among the confines of the temple. As the music progresses, this motive comes in more and more until it is an ostinato under the chordal strings and choir. Eventually the piece crescendos and leads into the next track, where Jack is finally the star of the show.