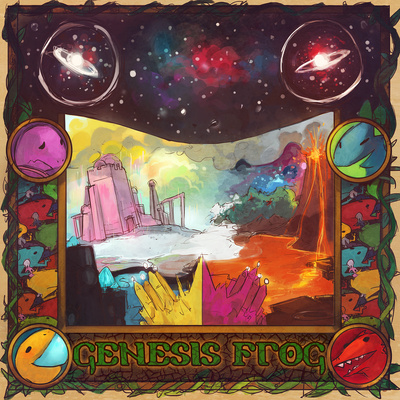 I’m uploading the commentary for Genesis Frog as text for those of you who could not buy my album but were interested in a composer’s thoughts and detailed descriptions on its concept and execution. This is Part 1 of 4. If you like the album I encourage you to purchase it if you are able, as it helps support me and it will be that much easier to bring you more music in the future!

I, Alex Rosetti, intend to make this a pleasurable experience for those of you looking for additional insight on the long-winded and self-absorbed music of this album. I assure you the commentary will encapsulate those qualities as well, perhaps even more so!

So, what’s this all about?

Genesis Frog is an album about the eponymous amphibian’s journey from paradox slime to universe. Specifically, it is about the frog Jade Harley attempts to breed and grow so that He may reach His pond in Skaia and fulfill His role as the next universe created by SBURB. Some themes of the album also address the Genesis Frog that Earth already inhabits, while still other themes could be applied to any Genesis Frog in paradox space. In more general terms, it is an album about Sburb’s mythology, which is both and remarkable and hilariously ridiculous in its ability to tailor fit itself into each unique session it is in.

When I first envisioned Genesis Frog, I did not imagine the album’s focus would be on a single entity from Homestuck. In fact, my first idea was to create a sort of “Homestuck Bestiary” soundtrack, giving themes to all the creatures and citizens of Sburb. The seeds of the album’s current form were planted when I decided I wanted to make a “Frogs” theme at the beginning and transform it into “Bilious Slick’s Theme” by the end of the album, thus symbolizing the overarching purpose of Sburb. I gradually fell more in love with the concept while more information on the Genesis Frog was covered in the story such as frog breeding, the Prospitians’ and Consorts’ worship of the deity, and Derse’s detestation of it.

I began to realize how important the Genesis Frog was to Homestuck’s big picture: the goal of Sburb is creation, and the main conflict in the story is preventing destruction. The most intensely cinematic End of Act as of this writing involved the assassination of two of these frogs as the result of a beautifully intricate plot and pushing the story towards its climax. One of my favorite aspects of Homestuck is its world-building (in some cases world-destroying), and I thought it would be fun to compose an album about an entity that quite literally contains its worlds.

Alright already, I get it, but what about the music?

From the very beginning I decided I wanted Genesis Frog to have its own unified sound, even back when it was “Homestuck Bestiary”. To accomplish this, I treated the album as a sort of orchestral suite, and it could certainly be referred to as such. Of course, getting a real orchestra to record this music is well beyond my means as an amateur composer, but I think the samples used in the album are high-fidelity and well-sequenced enough to be enjoyable.

There is a lot of continuity between tracks on the album, which lends itself well to the idea that it is an orchestral suite. Genesis Frog is really a singular work rather than a collection of somewhat related songs—I paid very special attention to the order of tracks and when certain recurring themes appear. The album has three main recurring musical motifs: the “Pondsquatter” theme (the main theme of the album and most frequently used), the “Divine” theme (which first shows up in Our Glorious Speaker), and the “Folklore” theme (which first shows up in Prospitian Folklore).

There are also a handful of musical devices and ostinati that find their way into various nooks and crannies that help contribute a sense of unity and are certainly fun to spot if you pay attention. I like to think all these snippets of musical material are treated the same way that repeated dialogue, situations and every other kind of callback are in Homestuck. If you recognize them you will enjoy the experience that much more, though the callbacks in the album are not that difficult to spot in my opinion, so it shouldn’t take as much effort as noticing Colonel Sassacre’s Daunting Text of Magical Frivolity and Practical Japery was heavy enough to kill a cat, and then finally doing so several thousand pages later.

While the album does deviate somewhat from the orchestral sound in a few small instances, the instrumental ensemble remains relatively constant through each track, with the exception of percussion instruments that come and go and a short appearance by an electric guitar and bass, as well some much more eccentric instruments than those.

Some final thoughts, thank you’s, and croaks of acknowledgement

Wow, did I really make it through the entire commentary without typing the word “ribbit”? Those of you who know me and my love for animal-based onomatopoeia are probably as shocked as I am. Perhaps more shocking is that I composed an entire album and only included two tracks with ribbits and croaks in them. And one of them is a bonus track, it’s a new personal record of some kind! Of course you shouldn’t expect me not to put animal noises in any album I ever compose, so don’t even go there. Alright, enough of that.

I would like thank everyone who took the time to listen to Genesis Frog. The fact that I have an audience at all is something to be thankful for, and even if you didn’t enjoy it I appreciate you giving it a chance. Thank you to everyone anticipating the album for all their patience and support in the time before its release. Unfortunately I wasn’t ready to release it before the Homestuck Kickstarter happened, so it had to be delayed quite a bit. However, I believe the album is all the better for the extra time I had to work on it. Thanks to everyone on the MSPA Forums who voiced their excitement in the Homestuck music thread, or otherwise interacted with me or gave me advice of any kind. Thanks to all my Tumblr and Twitter followers for actually caring enough about what I have to say to follow me. I hope everyone who knows me or pays attention to what I do musically enjoyed this album, as well as people who were not familiar with me until now. I appreciate every single listener I have, and without you guys the only person listening to my music would be my mom and close friends, and somehow that doesn’t have the same sense of accomplishment to it.

I have two very big thanks reserved for my two artists and collaborators, Marina and Rikuru. In a lot of ways this was a joint project, and their art is just as important to the album as the music. From the beginning I decided I wanted the album to be as unified visually as it is aurally, so I tried contacting two artists who were friends with each other and were capable of drawing in a unified style together. As it turned out I could not have made a better decision. Both Marina and Rikuru have knocked every piece of track art out the park the instant I saw them. Their artistic vision matched mine perfectly, and I truly feel that each piece of art they made was a faithful visual interpretation of my music in terms of color, tone, style and pretty much anything you could think of.

The three of us tossed around ideas a lot; I looked at sketches, I explained what each piece of music was about, the feelings the music conveyed were discussed. Amazingly the two of them were able to produce all the art necessary for the album and we didn’t end up needing any outside help. One of this album’s greatest strengths is definitely its unity, and working closely Marina and Rikuru ended up with a product I think we can all be proud of. Thanks so much for all your hard work, both of you. The album is that much better thanks to your artistic visions, and I hope you had just as much fun as I did working on it.

You can find the work of the artists here:

I would also like to thank Toby “Radiation” Fox for being a constant friend and getting this album up and running. He’s always been a source of inspiration for me whether he knows it or not, and every time he’s given his input on my music it has helped me. Kudos to him taking care of so much business on behalf on the Homestuck music team and finding talented musicians in the community to help showcase their music in addition to the “official” (pfffahahaha) team’s.

Of course I would like to make an obligatory thank you to Andrew Hussie for creating Homestuck, the entirety of which inspired this album (even the bits of it that don’t have frogs). Without his story I wouldn’t have had the opportunity to grow and interact with similar-minded musicians the way I have. And without his permission, I certainly wouldn’t have this album to show for myself.

Genesis Frog has undergone quite the journey over the last couple of years, even if the larger portion of it took place inside my head as vague bubbles of inspiration. I was finally able to compose the music I had always wanted to compose and contribute my own voice and interpretation of Homestuck to its discography. This is an immense privilege and one I will always carry in my mind as one of the most important opportunities I ever had in my life. It’s an excellent time to be making music, and I will take everything I have learned in making this album with me as I continue to compose in the future. Thank you once again for listening, and make that a double thank you if you read through this extremely long-winded commentary.

I am Alex Rosetti and I am a composer who loves video game music, whether it is listening to it, studying it, or making it. If you’re interested in my music or any other projects I’m up to, feel free to check me out at any of the following: