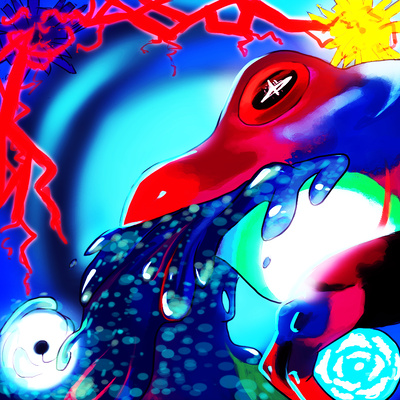 Tracks that The Vast Croak references:

Tracks that reference The Vast Croak:

After six notes from the drumset, the grand finale begins. I still don’t have a clear idea what prompted this sort of conclusion to the album. For the longest time I intended to end it the way Speaker did, and that track indeed had a finality of its own. But I wanted something exciting at the end, and I felt like there was still momentum left over from Bilious that I could do something with. So despite only having a vague idea of what the Vast Croak probably was at the time of this composing it, I ran with my assumptions and based the album’s last hurrah around that idea. What little information existed implied the Genesis Frog will Croak once He has matured, and I can only assume it signifies the birth of the new universe in some way. I hope my interpretation does not end up conflicting with canon, and even if it does with any luck the music will still match the tone of it and my thoughts will remain hidden in this commentary.

Kanaya described the Vast Croak as the most amazing thing she had ever seen. I doubt anything I compose could possibly match the scope of such a cosmic event, but I at least attempted to capture the excitement of such a thing happening. When one thinks of the Vast Croak being put to music I’m sure bombastic orchestrations come to mind, like bass drum hits and gongs swelling, the brass going wild. Maybe that would have been the right direction to go in. Of all the tracks on this album this one probably puzzles me the most, since I’m not sure exactly why I decided to go in the direction I did musically. I wouldn’t be surprised if a lot of people think it isn’t appropriate for its namesake, and maybe someone else could compose something more suitable at some point. All I can say is that I wanted to capture the excitement of the moment and create something that felt like joy spilling forth. I wanted the music to have a big sense of happiness and accomplishment, a feeling of “yeah, we did it!” Even if it did not capture the feeling of the Vast Croak in as literal a sense as it could have, the music has the kind of feeling I imagine players would have upon reaching this final, monumental goal. That is my defense, and I am sticking by it.

The sense of excitement is what prompted me to bring the drumset back. I thought the piece needed a percussive drive like Bilious had, so I employed the same method. And hell, if I’m going to bring drumset into an orchestral setting then I might as well do it a second time. The Dorian version of the Pondsquatter theme played by the horns and trombones is reminiscent of its use in Prospitian Folklore. In fact, the second phrase appears exactly as it did in that piece and after repeating it goes straight into the Folklore theme. At this point in the music I thought it was appropriate to quote some of the themes from earlier in the album as a sort of “B” section. I mixed together all the Consort themes once the Folklore theme ended and snuck in a little bit of Breeding Duties. I liked the idea of bringing all these themes back, since presumably all of them would have a role once again in the new universe being created.

The A section then returns in a transposed form before the piece ends in a very big fashion. When all appears to be said and done and the very last of the reverberation is dying off, the harp comes in. It is followed by clarinet, piano, celesta, and finally the violins playing harmonics; this is the instrumentation the album opened with. This small ensemble plays a subdued arrangement of Pondsquatter, and the album ends as it began in the vastness of paradox space. If you start the album over again, you will find that it flows seamlessly from the ending to beginning. Somewhere in this revelation lies my ultimate artistic intent with Genesis Frog, which probably involves something about infinity’s endless repetition, or life always finding a way forward, or something along those lines depending on how pretentious you want to think of me as.