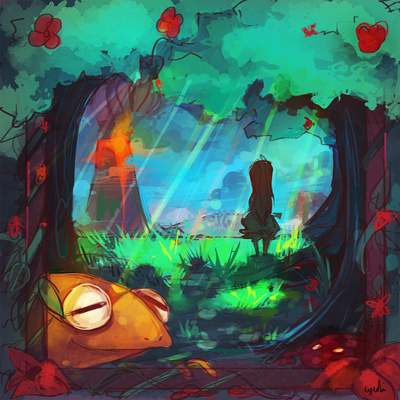 Ah, frog-hunting music. I had the idea for this track brewing long before Homestuck Volume 8 was in the works, so you can imagine my horror when not one, but two tracks with this subject were on it. I have to give props to Jit and Bowman, those are a couple of great pieces and they both explore the idea in unique ways. I lamented however, worrying my track would be extraneous. How many times could we repeat the same, specific idea, after all? So I had to think outside the box a little bit. I would try to capture the entire experience of not just the hunt, but exploring LOFAF after the Forge had been stoked. This piece is programmatic in the same sense Breeding Duties is—it is meant to be a collection of musical ideas depicting any number of scenes the listener might imagine. Which isn’t to say the music isn’t thematically grounded; it is essentially based on one theme in addition to the Pondsquatter theme, which also has a large presence.

Earlier in the commentary for Breeding Duties, I referred to that and this track as being the heart of this album. It may sound hokey, but when I think of Genesis Frog I think of these two tracks. I think they exemplify the kind of music I’ve had in my head for two years and wanted to compose most. When I first thought of them, I knew Genesis Frog as an album would work, this was the kind of music I had always wanted to listen to but no one had quite made yet. This isn’t to say it’s anything new or innovative; merely that it is a specific sound I love that I wanted to hear. I think the album experience is purest during these two tracks, as ridiculous or pretentious as that may sound, but I don’t know how else to say it. Great LOFAF Expedition of 2009 is made up of so many of my favorite things to do in orchestral music, so for better or worse you can use this as a roadmap for my compositional output and ridicule me as I become more and more of a slave to my own style.

It opens with a solo horn call to signify the beginning of the hunt. Normally these sorts of calls are based around perfect fifths, but I totally broke the rules like the rebel I am and used it as a way to introduce the main theme. After that, the piece is split into three sections, the first being a march featuring a piccolo playing a variation on the Pondsquatter theme. The orchestration gradually fills in, and an ostinato is introduced in the xylophone and santoor (a string instrument native to India) that is used throughout the piece. After the march, we dive into the undergrowth, represented by the next section.

The music makes a shift into 7/8, though no true pulse is really established. As a result, many different lines of counterpoint come in at disjointed intervals, lending to the image of a lot of different frogs hopping around in the depths of the forest. The pace picks up again when the music shifts back to simple meter and the march rhythm is brought back. There is more counterpoint here with the main motive of the piece; it is overlayed with itself in several different rhythmic rhythmic transpositions over the march ostinato. Then, after a brief interlude, the piece shifts back into 7/8 with more of a pulse, and the Pondsquatter theme is repeated in full followed by a coda based on this piece’s motive. This is one of the few pieces on the album that ends on an unambiguous tonic chord, which I thought was very refreshing at this point. Especially in light of this piece, which I promised would be overkill thanks to all the ridiculous directions it manages to go in for its duration of five minutes.