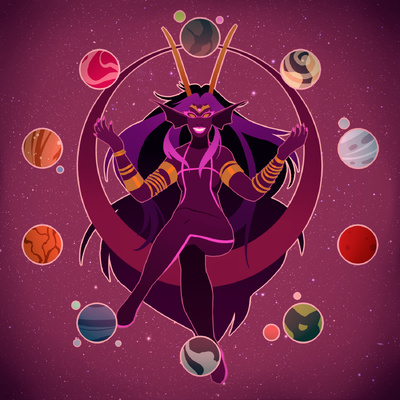 Wait why did this get on the album it sucks

It's about the Condesce, obviously. It's vaguely about her conquering a planet? The natives fight a long fight and then they just barely win! and everyone is reflecting on their loss and then she just glasses them or whatever she does. There's Crystalanthemums mostly because it seems to be teh default badass-trolls theme. Also that is some badass art.

The prompt I received with this track was "the Condesce (conquering planets)". The bubbly synths and unusual harmonies called to mind a geometrical design of neons against blacks, and I thought a logo-esque look suited the rather propagandistic vibe of the title. (Am I overthinking things? Probably.)

The image's composition, in which the Condesce is encircled by the planets she has conquered and ruled, is inspired by the Diamond murals from Steven Universe.