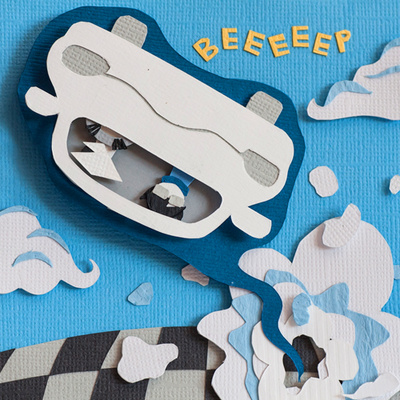 Electrocumulus is a remix of Pyrocumulus by RJ Lake and was my first ever attempt at remixing an official Homestuck track. Looking back, I have no idea why I chose to remix this song in particular; it must have just been stuck in my head that day. As one could gather from the title, this remix is supposed to be an upbeat, elecronic remix. As I was composing, it seemed to turn into a dance track of sorts. The genre still fit my idea, so I kept going. I think it was a rather successful first Homestuck remix.

The songs this was remixed from are associated with Skaia and the battlefield, but I thought that Electrocumulus was way too high energy and fun for something like that. I decided to go for the next best thing- John speeding through Skaia and plowing through clouds in his Dad's car! As it turns out, exploded clouds are also rpetty fun to cut out with a scalpel.