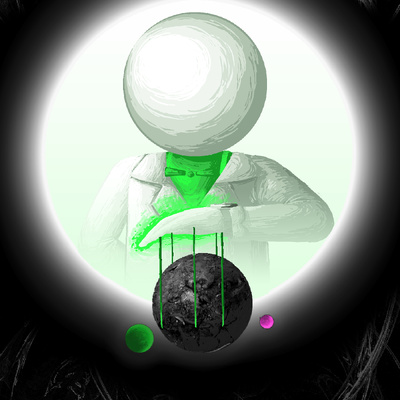 Tracks that The Puppet Master references:

When I was first given the opportunity to work on Cosmic Caretakers and saw that there was an open slot for a track centered around Doc Scratch, I jumped at the opportunity to produce it! Scratch has always been one of my favorite characters in Homestuck. When I read through the comic for the first time I loved how he orchestrated the destruction of two entire universes but managed to give an air of dignity and style to such a nefarious event. His demeanor was never overtly evil: it was unsettling at times, sure, but he always acted the part of an excellent host through and through. I tried to represent this atmosphere in my own song. Its jazzy feel ripped from "Drawing Dead" or "The Felt" definitely brings to mind a comfortable stay in Scratch's parlor, but if you listen closely you can notice sinister undertones lurking beneath the surface through the decaying bells and whistling winds. Of course, I had to throw in some reverse piano in the mix as well. It wouldn't be a Felt-centric song without one. Towards the end of the track the piano backmasks some iconic Beta Kid motifs, showing how Scratch is acutely aware of every piece to his puzzle (even when we're not). What kind of an excellent host would he be if he didn't keep tabs on his "guests", after all?

So! The Puppet Master. The laid-back yet sinister vibe this song gives off felt fitting for Scratch, who, for most of the comic, just creepily stands and watches things happen. That's why I decided to not have Scratch do some Cool Actiony Villain Pose - he's a puppetmaster. He just needs to lounge. Yazshu took care of the Alternian planet, moons, and the cueball/sun/thing, so thanks to her for the backdrop!