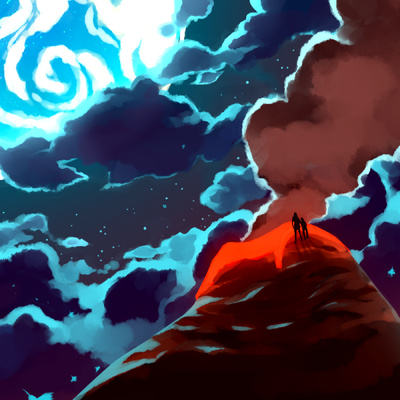 Well, here I am again. Paige Stanley, closing disc 1 of a LOFAM, 4 years after I last did it. In that time, I technically became an Official Music Team Contributor!! I helped my dear friend Marcy Nabors with creating Solar Voyage and Renewed Return from Volume 10. I got 12 bucks on Paypal from What Pumpkin for that! Andrew Hussie bought me lunch! I got burgs with homestuck money!

Speaking of burgers, Crystalendofgames is a song that I made back in 2012 on a stormy, Autumn night. The power actually went out while I was making the song, even! The version you're hearing is from after I taped my broken ego back together and remade the whole damn thing. It's pretty Neat And Cool? I make cooler things now, though. Either way, I'm glad it could be a part of this wonderful Loaf Man.

This track has a climactic and solemn feel that, for me, seems to suggest the chillingly peaceful scenes preceding the violent turn of events in Act 7. As the quietest and yet most significant event in EoA6, I chose to depict the scene of PM and the Mayor climbing the Forge to cast the ring in, against the looming light of Skaia.

This is one part of a larger image formed by the covers of this, Ultimate Alchemy, and Black Hole / White Door.