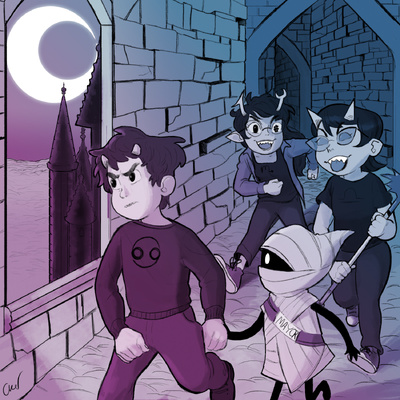 This gentle but haunting refrain from Buzinkai reminded me of those calm-but-ominous moments in my favorite adventure games, particularly a fantastic little game called Cave Story. Given the title of the track, a castle-exploration scene seemed to be a given.

I knew I wanted to draw the trolls, and liked the idea of depicting Terezi and Vriska during the post-retcon timeline. So I went with one of the castles we see in a Dream Bubble.

Although, compared to the vibe the song gives off, The Scourge Sisters seem a little too excited to be exploring this creepy old place. The piece needed something to give it a more ominous tone. A scrapped concept involved Karkat and the Mayor, so I put them in the forefront here to add a sense of urgency and foreboding - they're probably not in any actual danger, but Karkat's not gonna let his beloved Mayor get wrapped up in Terezi and Vriska's castle-plundering shenanigans. Visually, I was mianly inspired by the illustrations seen during the ending credits of Cave Story, and how effectively they used limited, almost monochromatic color palettes. I cycled through a lot of different colors for the piece before deciding on the blue/purple gradient here.

In hindsight, I could have easily set this piece in any of the castles on Prospit or Derse, but then I couldn't easily include the Mayor. And I really, REALLY wanted to draw the Mayor.

Besides, pursuing a more obscure concept forced me to get more creative with the scenario and composition.

So, ultimately, it's a win-win!