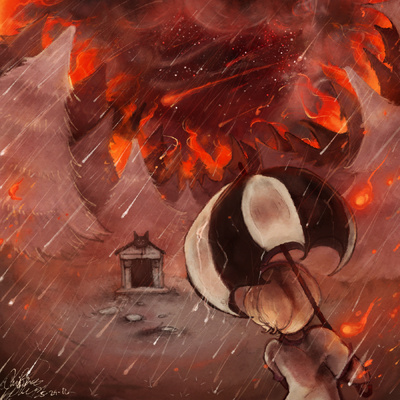 I got inspired by listening to a friend's liquid drum and bass tracks back in 2014 (shoutout to you, Justin!), and decided I really wanted to do something along those lines.

Anyway, life happened so fast this track collected dust until RJ and Marcy yelled at me to finish it.

Oh if you want to check out Justin's work, go here: www.facebook.com/FliteDnB/

So I was minding my own businesso ne day, and then all of a suden Solatrus came and asked me if I wanted to do some art for Volume 10. Naturally, I obliged, and I asked him if he had anything specific in mind that he wanted me to draw for it, and he basically told me to draw whatever came to mind. So I listened to the WIP of the track he sent me a few times to get a feel for what I wanted to draw for it, and jotted down a couple of concept sketches for what I wanted to do!

The first character that came to mind was Rose for some reaosn, and the track gave me a bit of a Skaianet vibe, so at first I sketched up a little composition featuring the meteor terminal in the Skaianet lab.

I scrapped that idea because it would've been far too much detail for me to do in less than a week, so I thought I'd do something with Rose making her way towards Jasper's mausoleum, with a view of meteors falling from the sky. After all, a title like Starfall called meteors to mind!

So I sketched up that idea and liked it enough to see it through to completion.

Fun fact: Solatrus was surprised that the final track art was so red, because he felt like the music would inspire more blues, but he liked it a lot in the end.

I always thought it'd be pretty cool to do something for an official album, and I guess that dream came true!

I'm pretty happy to have had this opportunity to draw something for this album.