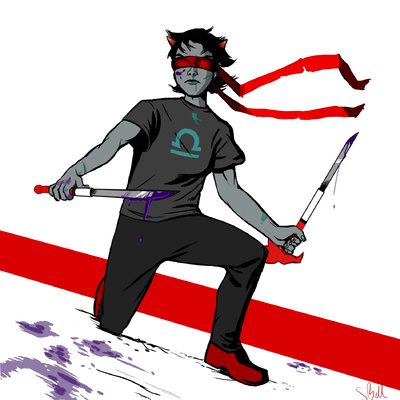 Couldn't end without giving Terezi another chance to shine. "Sound Judgement" basically tells the story of Terezi's "CLOWN HUNT1NG" escapade where she goes hunting after Gamzee, battles him & gets spectacularly "ATOMIC DOUBLE JUGGALO BACKBREAKER"'d for her trouble. Goal here was mainly to create a "Terezi doing something badass" track: A little inspiration from things like "Battle without Honor or Humanity" from Kill Bill, sprinkled with little bits inspired by Terezi's theme, then a bit of weir dguitar solo for Harlequin to represent Gamzee, and a whole load of staccato strings and rhythm guitar everywhere else.

Originally called "JUDG3M3NT D4Y" but we already have a track called Judgment Day.

We've literally used all the names.

"Sound Judgement" works better though, although it should probably be "Smell Judgement"?

That sounds ridiculous though.

For this piece I wanted to go really comic book-y, so I leaned towards a Daredevil influence for Terezi (for obvious reasons). Initially, I had her in a more dtailed setting in extreme light and shadow, with Gamzee's silhouette looming over her. Totally by accident I ended up deleting the background layers, leaving just the strip of red lava as the orizon-- which looked way cooler than what I had before and gave it the comic-book-cover vibe I was shooting for. Super fun piece to work on!