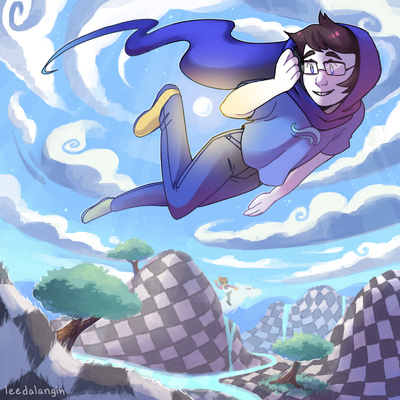 The 1984 fantasy film "The NeverEnding Story" was one of my favorite childhood movies.

It was the first movie I ever remember watching at the theater, in fact!

And the film's fantastic soundtrack by Giorgio Moroder and Klaus Doldinger had a lasting impact on my own musical creativity. Doldinger's high-energy orchestral theme "Bastian's Happy Flight", in particular, is something special that has stuck with me throughout my life like few musical pieces have - an inspiring masterpiece embodying childlike wonderment in its purest form.

Andrew Hussie liked that movie, too, I guess.

So when Hussie came by my house riding a long magic dog through the sky and causing the absurd movie-referencing shenanigans called Homestuck, I somehow knew that the only proper response was to mash together the "Skaian Ride" and "Skies of Skaia" themes into a nostalgic homage to Mr. Doldinger's soundtrack.

(I am sure Mr. DOldinger - much like a certain ill-fated group of bullies - never could have seen THAT one coming.)

I wanted to illustrate Skaian Happy Flight when I heard it because the music was so whimsical and uplifting, I knew doing the imagery to match it would be fun. When I asked the musician what their vision was for a scenario or character, they said they didn't have anything in particular in mind (though they mentioned some influences from The Neverending story, which Homestuck also referenced. There's a tiny Hussie riding a dragon in the background of my picture, based off a comic page I was shown, haha!)

Just based off the song title, I decided to draw John flying through some pretty Skaian scenery, so I set to work doing preliminary brainstorming. I mostly wanted to settle on cohesive shape language for the sky and the trees, since I already had an idea of the overall composition, and I really wanted the picture to be wispy. Unfortunately I didn't save too many WIP shots, but my sketch was pretty straightforward and most of the struggle came from deciding the colors for John...

One of the WIPs I've included here is showing a roughly shaded layer for John that I ended up scrapping for the simpler coloring that's in the final version.

There were aspects of the more detailed coloring I liked, but I didn't want John to stick out as awkwardly rendered against the otherwise mostly simplistic background style. I had a lot of fun creating this piece and I hope it does the cute song some justice!