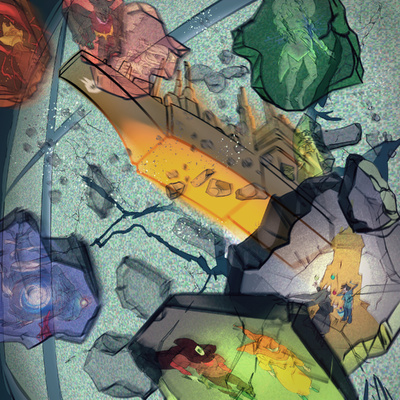 Cascade2 has a strange following online.

The post with the track itself (feel free to google around to find it) isn't that popular (though, relative to the rest of my blog, it's practically Michael Jackson) but the people who've heard it and like it are very vocal about it getting a release.

So, you know, here it is. Freefall hems pretty close to my original remix's overall arrangement, except it swaps out all the samples for newly recorded material (all me) and riffs way, way more loosely on the song quotes. This song is older than [S] Cascade is, and I think the difference between the original version from all those years ago and this is one of the most striking comparisons you can make to show how far I've come.

I was approached by RJ to do a track art of my choosing for the album and decided to work closely with him for the track "Freefall." The track's subject was the EoA5 flash '[S] Cascade', which was from what I remember a clusterfuck on so many levels in the Homestuck universe and for the MSPA wegbsite & Newground's hosting servers.

It sure was a ride I'll never forget.

I'm pretty content with the result despite having a short notice to finish it. I wanted to reflect on the clusterfuck of the flash's narrative in these glass shards falling from the area of impact; I love compositions where you can notice something new every time you look closely at it. It also fit well with the title of the track as well.

I also remember there being a lot of contrasting colours in the original flash, so I played with those in this image as well.

Very glad to be able to have the opportunity to draw something for the album overall!