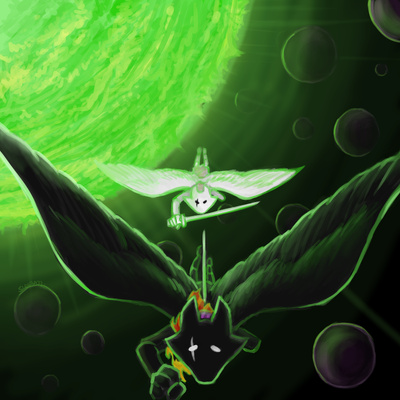 Way back in good ol' 2012 I was in a little one-off band with Erik Scheele, Clark Powell, Astro Kid, and the ever-charismatic Michael Guy Bowman.

At one point we played a small backyard show of Mobius Trip and Hadron Kaleido tunes, along with many other Homestuck songs you all know and love, to a lovely audience of dedicated fans.

In an effort to pack our show with even more Homestuck material, we put together this cool medley as a live bit, based on songs some of the band members had worked on.

Four years later, and with the addition of some radicool guitar by Tensei and rockin' drums by Jamie Paige Stanley, we're pleased to present it to you in this glorious and shiny new form!

I recorded some vocals for Explare (as it was called at the time) like a year ago bc marcy was like "hey this might be on the next homestuck album?" and i really wanted to be on a homestuck album, so i show up for like twelve seconds. this is a dream come true