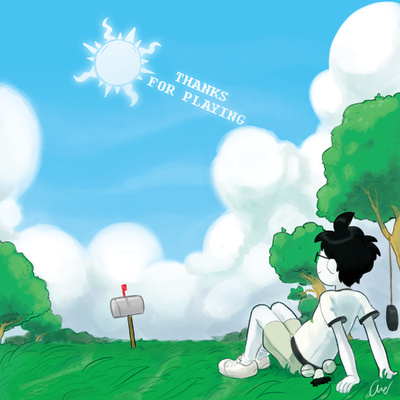 Oh, hey. Is it the last track already? Man, where did the time go?

Wow. This piece has run through my head more times than any other that I've written for Homestuck. I hadn't been on the music team for very long before I felt motivated to create something in my head that could conceivably serve as a compelling closer to the comic, regardless of whether it ended up actually serving as such. Arguably the most thematically significant musical motifs in the comic - "Sburban Jungle", "Showtime", "Skies of Skaia", and ofcourse, "Homsetuck" - would all have their part to play. I first put it down into corporeal form in late 2010 as a full-length piano draft, but it wasn't until four years later that I began working on the final orchestrated version.

Efforts to complete it over the next couple years were sparse and sporadic at best and fraught with technical issues, but thankfully I managed to make the deadline for the album.

I wanted to make something that, although perhaps bittersweet, has a definitively happy ending.

Despite all the super bad stuff that goes down through the course of the comic, Homestuck is ultimately a story with a message of optimism. Learning, growing, helping, loving.

Blossoming individually, but also working toward a shared goal that's so much bigger than the individual and so totally worth it in the end.

These are themes that play out through the entire comic, but also themes that are reflected in our reality.

I wanted this piece to be an expression of ideals that I, myself, believe in.

I'm hopeful that you believe in them, as well.

Look how far we've come! Beatfox did such a spectacular job combining so many early Homestuck themes here. Listening to "Conclude" for the first time was a major nostalgia rush!

It's a fitting finale to a fantastic album. I went through tons of variations of the same image of John and his friends looking ff into the new world they'd built, but I couldn't quite nail down the concept.

Nothing, no matter how vast in scope, or how many kids I crammed in there, properly conveyed the feeling of finality befitting the final track on the album, and the end of HS itself.

Realizing that my initial concept was leading me nowhere, I returned to Act 1 for inspiration.

My single favorite page in HS is page 82 - the soothing but foreboding sound of wind chimes ringing in the howling breeze might even be my favorite use of sound in the whole comic, period.

I intentionally set the scene to look a lot like his yard in Act 1, with the "THANKS FOR PLAYING" text hanging in the sky as the one distinguishing feature that sets this piece post-Act 7. Here, John isn't gazing forlornly at his neighborhood in the anticipation of a long day, but relaxing somewhere warm and familiar after that long day has finally come to a close.

By the way, I haven't forgotten that his ACTUAL yard isn't exactly intact by the end of Act 1, but I figured it was worth it to take a little artistic license to deliver what this track needed.

It's not TOO much of a stretch to assume that John or any one of his God Tier pals could have rebuilt his home in the new universe, right?

It's my headcanon and I won't be shamed!

On a final and more personal note, Homestuck, and its music,
hold a very special place in my heart.

I began reading in 2011, so there was a lot of the comic and a lot of music to catch up on. I saved up so I could buy and binge it all at once. My favorite themes fueled many lazy days drawing fanart, which I eagerly shared online. I can sincerely say that doing so changed my life in many ways, as is the case with so many little, seemingly inconsequential decisions. Sharing my enthusiasm for HS led me to meet many dear friends.

That's an experience that I think HS encapsulates incredibly well - the incalculable impact something as simple as sharing something with friends can have.

This piece is my thank-you to Homestuck for that experience.