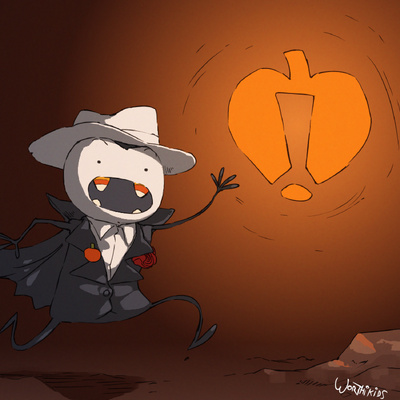 Tracks that THIS Pumpkin references:

THIS Pumpkin is an arrangement of Seth "Beatfox" Peelle's Pumpkin Cravings from Homestuck Volume 5.

If I recall correctly, Beatfox said he was imitating Danny Elfman's style in the original 8-bit piece. One of the many great things about it is all the "orchestrations" he does with such a limited palette, and how strong they come through.

So strong in fact, that I've wanted to make an orchestrated version for a long time.

Consider it fully "Elfmanized" now. The title is a referenced to the "THIS FUCKING PUMPKIN" line from Problem Sleuth.

For obvious reasons I decided to drop one of those words when naming this arrangement.

Alex's original request for this art was "so here's the thing......
could u draw the what pumpkin logo....
but with an exclamation point instead of a question mark
maybe candy corn vampire-problem sleuth could be holding it?"

I remember drawing the altered logo all plain by itself and sending that to Alex,

and he liked that fine,

but I was ultimately irked and redid it with candy corn PS a few days later.