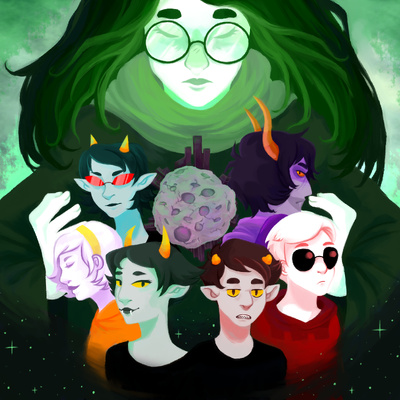 I actually wrote the melody for this track almost five years ago, for a project that never got off the ground. As far as I can remember, I didn't have any particular inspiration when I wrote it, musical or otherwise. It's the catchiest tune I've ever made, yet I couldn't tell you how it came to me exactly. This version is a completely unique take on this melody compared to the original context, giving it a very different Feel. I wasn't able to do any of the audio production for this track, but I did guide RJ as to how I Feel it should be put together. We ended up pushing the deadline too much with this one, and there are still a couple things I wish had been changed, but like with any creative work, you need to draw the line somewhere, lest you polish it endlessly.

In the end, I'm gald to finally share itw ith the world in some form, and I hope the world enjoys it.

This is really Luke's song. I started the project file but he made it his own. The crow noises are mine.

RJ, if you arranged this piece, then there must be an original you used as a base. Is there some sort of file or sheet for that track?

luke might have a famitracker file. the way it worked is basically that he wrote the vast majority of the melodic content in famitracker and sent that my way, and i incorporated it as i saw fit. some of it's completely my own - that bassline, and the break section, for instance, as well as the second solo - but most of it comes directly from just a few wavs he shot my way.

so ask him, is my best advice!

Being so high energy, I wanted to make the piece as colorful as possible, but not unattractively saturated. Initially I planned on reflecting the characters in dream bubbles of their respective colors, but decided to depict them in full mugshot instead.

Each character is lightly engulfed in a colroful overlay in front of the chaotic, perpetually expanding infinity of gay space.

Feel is a very powerful song full of energy. We were inspired by the tension filled events occuring during the 3 year span of time between those stuck on the troll meteor, flying through space towards an unknowing and terrifying future.

When rendering the final rendition of the track art piece, I hoped to give it a complete finish that would accustom the piece's lovely concept art. I enjoyed working to convey the spectacular energy Jade is known to behold, particularly with her hair.

Overall, this piece was a great enjoyment to work on, and I was able to accompany two great artists in their work to create art to represent Feel, as well as the teens' spiraling adventure on the gay meteor.