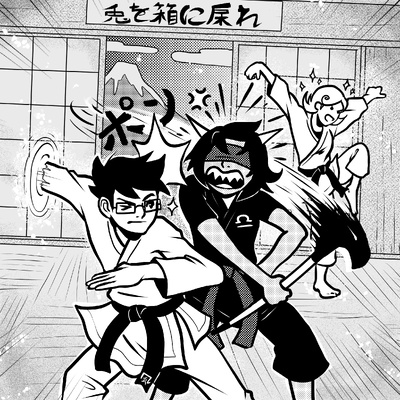 So I may have originally thought this track was about a literal train and been like "I can't really drawn trains..." only to be told it was more like a training montage for John and agreeing that maybe I can actually draw John. I'd been watching a lot of Ruroni Kenshin with the girlfriend on Netflix and because this art was done by me as a last minute switcheroo I didn't have much time, so I did what I do best; I was a piece of weeaboo trash and made this ridiculous fake shounen manga panel in manga studio.

The Japanese reads "Usagi o hako ni modore": "Put the bunny back in the box".

The next day I landed a job working at a Sake company. True story.