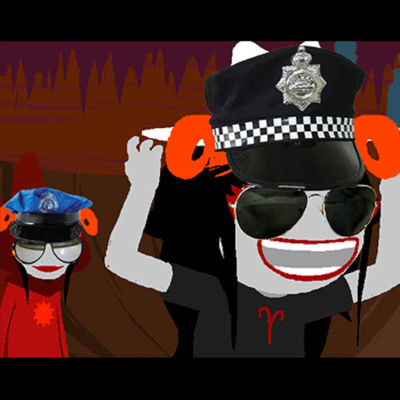 Alternia: One of the roughest beats in the universe. It's a tough job to keep it safe, and an even tougher job to find people who'll keep it that way. She's a gal with a knack for justice and has the force under her thumb. He's a guy who just joined the APD and finding his bearings is about as easy as feeding a Gyclops his cough syrup. And together, they are Trollcops.
It isn't going to be easy teaching the rookie the ropes of the force, but she's the only one who can do it without getting him killed. So far the biggest problem they've hit is striking the right chord with each other. It seems like whenever they're partners, there isn't a moment when they're not both at each other's throats. It's gonna take a miracle to find a middle road with this pair, and keep their antics under the hat.
However, if it weren't for that kartheft, the team would'a never gotten their issues ironed out. Now, they stick together like glue and macaroni and keep Alternia shining like a green sun. One thing's for sure, if you cause trouble in their neighborhood, these two will sort you out quick, because together, they are...trollcops.

I wasn't sure how people would react to Jit's voice in non-Gamebro format, plus a few of his pronunciations weren't exactly clear... so I told him to make an instrumental version instead...

But you know what? I still love this version for all its campy glory, so here it is as a bonus track!