Artist of well over 100 tracks in Homestuck's musical canon (including the elusive Penumbra Phantasm), Toby Fox went on to compose the much-renowned soundtracks to his games UNDERTALE & DELTARUNE, firmly planting his place in modern game and internet history.

Next: The Baby is You 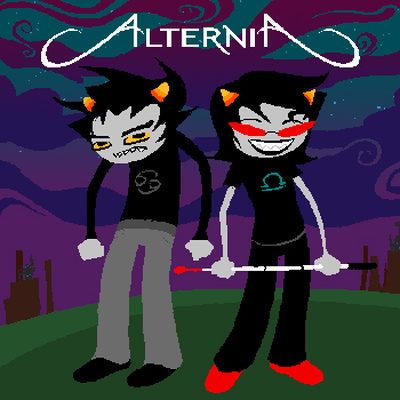 Hey, just a brief (LOL JK) message from the guy who made this album - Toby "Radiation" Fox, if for some reason you haven't seen that name anywhere yet.

First, thank you so much for buying this!!! I haven't been composing music for very long but I greatly enjoy doing it, so I composed these tracks as a fun way to make some money for college. I also created this album primarily to challenge my own creative limits; I'm usually known for creating hard-rocking, fast-pumping tunes with very obvious video game overtones. With this album I tried to show that I can manufacture a soundscape beyond that... that sometimes I'm capable of variety! (probably not what you'd normally expect from me! SORRY BROS)

Unfortunately I wasn't able to finish the track for the fourteenth troll, Larry, whose track is comprised entirely of the sounds of horses neighing. It was a new genre Andrew and I invented together, and with it I would have consummated my quest to create every type of music known (and unknown) to man. The fact that I didn't finish that track is my only real regret. It keeps me in tears. But overall, aside from that one little fluke, I'm happy with the amount of stuff I was able to pull off, and the amount of improvement I made because I decided to defy the notions of my original style.

So how did this all start, anyway?

The scene: Late May 2010. I was talking to Andrew Hussie (as we are soul twins) when I asked him if I could do a solo album called "Alternia." Alternia's idea was thusly: The trolls have an entire game that none of us would probably ever see in any detail. Taking free reign over this unscripted world, I would go ahead and make a soundtrack to their game session as a parallel to that of the kids, mocking the tracks found in the early Homestuck albums - Harlequin would be recalled by a track called Crustacean, Showtime by Showdown, Aggrieve by Aggrave, Sburban Jungle would be Skaian Summoning, and the list went on. When fully-formed this album would form an alternate "troll version" of the original Homestuck albums, revealing the similarity in the alternate worlds through song - hence the name "Alternia."

Obviously Andrew was fine with this idea. (Unless in fact you are reading this in the alternate universe where the album was canceled and replaced with the other one we were planning. The one filled with horse neighs.) In fact, he only had one thing to say against my original concept.

I said: "We're not gonna see their game session."

And then on 6/12, the troll game session arc started. WHOOPS AGAIN.

Luckily, I was there the exact moment the arc started, and I rushed to the forums to enter "Alternia" in the suggestion box. Hilariously enough, my name was chosen to be the planet's name (Alternia I mean. Although I'm sure Planet Radman McDoucheface was a close second in Andrew's mind). If I hadn't been able to post in the suggestion box when he was choosing the planet's name, and it was named something else, I probably just would have renamed the album "Hivebent." (Or "Radman McDoucheface's BIG HITS.")

By that point I had only completed 4 tracks - Showdown, Crustacean, Skaian Summoning, and "Theme," the latter of which I had to scrap because it was too nice-sounding for the trolls, to phrase it terribly. As Hivebent kept updating I realized that I really couldn't do whatever I wanted with the album because we were actually seeing the trolls' world. I decided that I would just scrap the parallelism and make a track for whatever struck my fancy. And boy was my fancy struck. My fancy resonated rapidly and colly, generating sweet, sweet overtones to each of Andrew's inspiring updates until I had accidentally created a track for every single troll and then some. (Maybe if Larry had debuted in the comic I would have finished that track. Blame Andrew.)

Now that I think about it, I guess that by making music for points in Hivebent without any established tracks as themes for the trolls, I imitated the first couple of albums in their sort of brave, musical pioneer sort of feeling more than I might have if I had chosen to parallel them completely and more literally, track by track.

So that's that story.

Also I'd like to clarify that this album is supposed to be 12 tracks long, but I can't stop myself from making music when the opportunity arises. So now the album is 12 tracks long, plus a bunch of accidental bonus songs.

Now, as if I haven't gone on long enough, let me toss some rude thank-yous towards some particular people:

Raised from infancy by the mysterious but melodious Rhythm Monks, Toby set out at the age of 10 in pursuit of a single goal: to be the master of all the beats. After years of travelling, he has clearly achieved this goal. None dare challenge him to a battle of rap; humiliating defeat would be the only possible outcome. He is the champion. Today, always in search of a challenge, he has moved on to musically depicting cyborg tits.

-minibiography written by Linnet, and is presumed to be 100% accurate

as with Homestuck Vol. 5, track art for Alternia and AlterniaBound is from the Alternia/Bound track art anthology projects! original track arts, which were largely (though not entirely) just crops of panels from the webcomic, have been left in the commentary for each track.