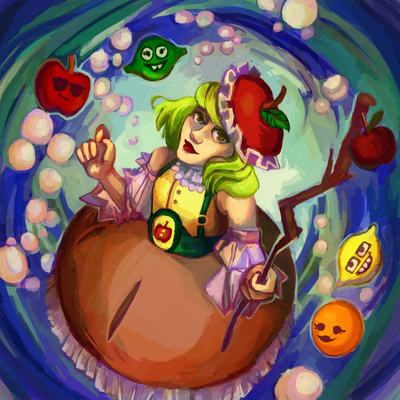 This song was formed out of a spontaneous idea by the LOFAM team to create a song about the happy fruits Jade carries along with her in Act 3, as well as Toby FOx's "fan character" Apple Girlington, who was based on the ever-popular Touhou Project series. These intersecting characters united for one song, and the result is a mega-medley featuring references to songs from Homestuck, Touhou, Toby Fox's Touhou improvisations and... Undertale? Yeah! As progress of the song went along, I envisioned it perhaps being made by the Beta Kids in-universe. All their corresponding instruments are here, after all. Remember when they'd collaborate on songs and post it to each other on FreshJamz? Good times.

Fun fact: each of the happy fruits correspond to a beta kid. Really! You've got the red apple for Dave, which is fitting because it's his text color and because he loves apple juice. Then the green lime for Jade, also because of text color. The orainge is Rose, because, uh, Roxy says she's similar to Dirk who types in orange I guess? Then the last fruit is the yellow lemon which has to be for John, because... uh actually you know what, forget it.

Ok, here's another fun fact then. The title of the song is a play on the FreshJamz player which has the fruits on its interface, the Homestuck song Hauntjam, actual fruit jam, and the fact that it is a song (i.e. "jam") about fruits. Neat!

Open your heart to the fruity embrace of Apple Girlington! I have the fondest memories of Jade's fruit mishaps back in Act 3 and a soft spot for fun and twangy tracks, so Fruitjam was the perfect storm. Her outfit is drawn from cubewatermelon's absolutely adorable APple Girlington design, and I've kept to the Touhou art tradition of contorted angles within a dramatic flying object vortex - but updated, now, for a lurid fever dream ft. the chlorine-headed personification of an apple.