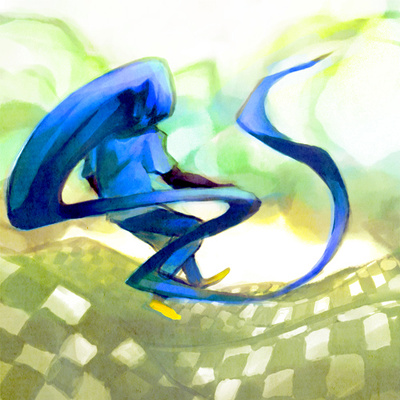 Tracks that A Study In Skaia references:

I don't really have much to say about this. I'd been messing about on guitar and found that most of the first theme from Skies of Skaia was playable with harmonics in standard tuning, and only the top note wasn't possible. By returning to EADF#BE and putting a capo on at the 5th fret it was possible then to play the whole thing.

The piece was originally just going to be loose reworking of Skies of Skaia using lots of acoustic guitars but then the second theme felt like it needed something more. I ended up adding drums and electric instruments for the second section to lift the piece and finished off with a little guitar improv into the quiet harmonics to finish.

I liked the alliteration in the title and it was pretty much how I thought of the piece. There's not really a reason for the hint to Sherlock Holmes.

I can admit that I had no idea where this was going when I painted it. I don't think I've ever drawn clouds before either haha.