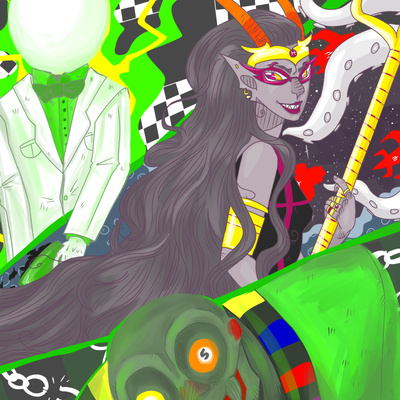 Hi there!! Welcome to the second LOFAM. Kind of sounds like some really gangster hiphop group or something. Anyways this is a song I made JUST FOR THE ALBUM!!! Wowee. There's a lot going on here. There's the intro which is like Lord English taking a proverbial shit on everything by existing or something like that, then it sort of BLEHs and goes into the main part of the song. Right off the bat you've got Sburban Jungle's marimba part played backwards on a piano, and then there's some stuff from a fan song that I don't remember the title of. THEN there's stuff from Condy's song off the unofficial ancestor album, and some stuff from some other things. There's basically a lot of things!! It's a very thing filled song.

paige told me the song was about doc scratch, the condesce and lord english, and since the track was titled chronology i tried to show some sort of a progression within the track art while expressing some of the background of each character.