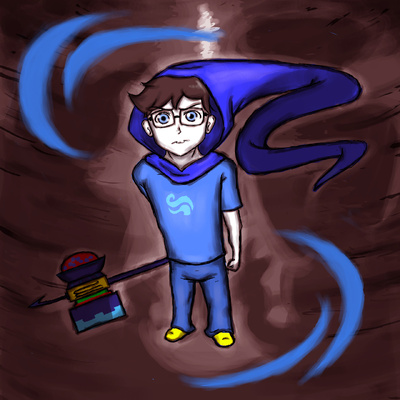 I composed SHowtime End Strife remix roughly five months after the time I got into Homestuck. Around this time I was still really just a budding musician, and I wanted to make something heavy out of the Showtime theme by Malcolm Brown. The idea was imagining what kind of soundtrack would be backing the kids as they face Lord English in a climactic battle. I was proud of it at the time but in retrospect it never really aged that well. Despite this it remained one of my most popular works.

Around the time I finished Rust Maid and Orange Hat, I was approached for the inclusion of the remix in LOFAM2. While I was happy to have the opportunity to give people the download so many of them clamored for, I really, really had to fix so many of its glaring issuse, and as such I remastered it for the album.

Showtime has always been one of the most memorable pieces of music in Homestuck, forever representing a (if not the) quintiessential "strife" theme. With this in mind, I think I had almost too much freedom in choosing the conflict I wanted to depict in this piece. Initially, I was going to make it John vs. Dad from Act 1... but that ended up being a little too underwhelming in comparison to the song it was for. So, in the end, I settled upon focusing the piece on a determined-looking John about to face down the underling horde at the beginning of Cascade. I'm pretty happy with the end result.