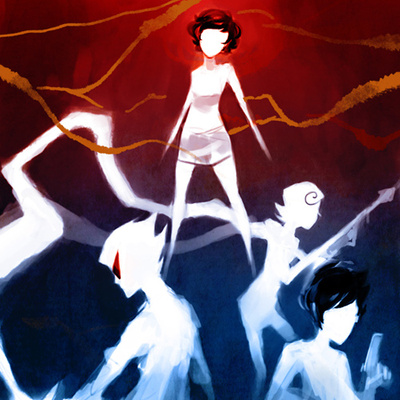 So... this piece was originally designed to just be... exactly that. Just another piece. It wasn't meant for Homestuck, it wasn't meant for Tumblr or anyone to see it. But a fantastic friend of mine told me about the Homestuck Music competition, so I figured why not. I sent this in after tweaking it a bit, and just for fun, threw it up on Tumblr. I then left for vacation, but still had internet access. I came back to see my song exploded on Tumblr, and was promptly getting upwards of 1,000-3,000 views a week. Needless to say, I was ecstatic. The song itself was kind of... my own personal blend? I love songs that combine organic and inorganic elements, and with Homestuck being the big thing on the block lately, I decided to try it out. As evidence by this album, it didn't make it, but it certainly was a big hit. However, what's funnier is that the version I put on Tumblr was the unmastered version, so when I put the mastered version up, it didn't get nearly as many hits as the unmastered version.

A lot of people have asked me whether or not I'm going to make a second Homestuck track. And as much as I love the motivation from fans to do so, I don't think I could handle trying to one-up a piece like this and failing. So, here's to you, Homestuck.

For me the song was about alpha kids, no question about it. It took me a long time to come up with a composition that I liked and that seemed to fit the song. LOOK OUT FOR THE MILES JANE