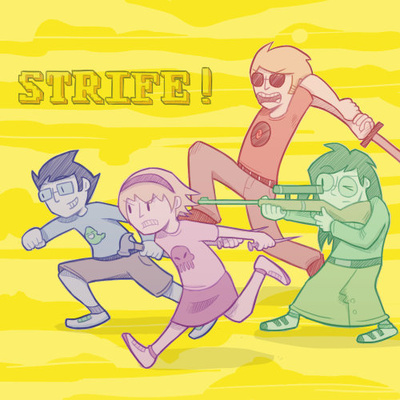 My goal was to mash up as many Homestuck songs as I could. I ended up mixing 12 together. I really think the part at the end with Black, Showtime and Beatdown works well, and I discovered that Showtime is the Homestuck equivalent of Guile's Theme: It goes with everything.

Listening to Fighting Spirit the first time kind of got me nostalgic for the old Strife pages, with their chiptune music. You know, waaaay back in the beginning of the comic when the Beta kids were still on planet Earth and were being harassed by trolls. So nearly a year later, I figured that a strife page would make for an excellent cover. Admittedly action poses have always been a weakness of mine, so I probably drew each kid at least twice for this cover until I was satisfied. Still though, I'm happy with how the art came out. Hopefully I did this awesome track justice.