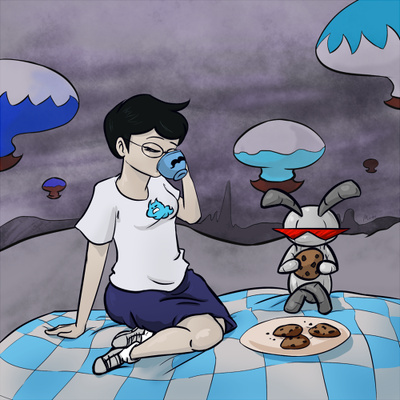 Jane's theme was my third and final entry into the HS music contest, conceived and completed less than a day before I made my submission. It obviously didn't make the cut, and Jane ended up receiving a much more badass theme in the form of Cyan Beast. At the time when I wrote the song (around January 29, 2012), we really didn't know much about Jane beyond the fact that she was a nice girl who enjoyed baking. I tried to give her a theme that was quaint and melodic, not too energetic like my other submissions; compared to most of the other characters, Jane is very down-to-earth, which I admired. Structurally, it loosely parallels Fuchsia Witch, which was originally titled "Jake's Theme."

When I first listened to it, I thought it was a really calm, tranquil song, so I thought maybe Jane relaxing. The more I listened to it, the more adventurous it sounded. Then it hit me, why not Jane having a picnic in LOCAH, picnics are relaxing and adventurous. Overall, I enjoyed the song, and I really enjoyed drawing this art for it.