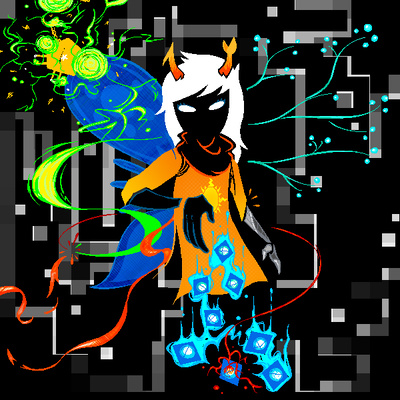 Elegy for a Thief (Dreamscape Remix)

Tracks that Elegy for a Thief (Dreamscape Remix) references:

I wrote Elegy for a Thief back in August 2011, inspired by the evocative image of ghost-Vriska standing in the snow outside John's house. After re-arranging it into a solo piano piece, I sat on it for a while. Eventually I began to work on another remix, but forgot about it. Then the song was nominated for Land of Fans and Music 2, and I rushed to polish up the song now that I had better tools and more skill. But I'd lost the original file, and the only remaining part of the scrapped remix was the right-hand piano notes (luckily, those were the most important part of the song)! The new remix is exotic and a bit hypnotic, syumbolizing John and Vriska's journey through the surreal and fantastic memory-realms of the afterlife.

Originally, I planned to do a sentimental image of Vriska standing in the snow, but it turned out pretty lame. Then I figured hey, since I'm making somethin for a fantastic song for an amazing troll, why not make the piece almost as gr8t as her? So the snow idea melted and turned into this bizarre, dreambubble-ish creation!

Now imagine my surprise when I heard that Ascenzo later remixed the song and made it like 16,777,216 times cooler.