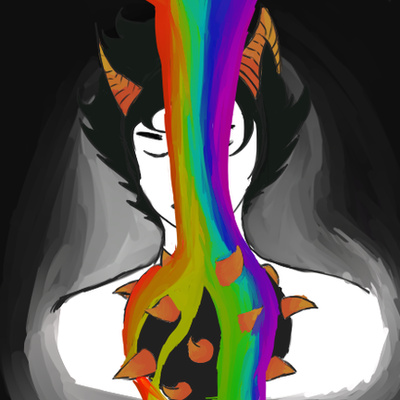 This piece was written for Kanaya and was essentially supposed to be a kind of score for the unseen scene where she wakes up as a rainbow drinker. The non-scene this is a score for follows the structure of [S] JOHN. RISE UP. somewhat, with the middle horn stab section hinting towards one of the themes from Savior of the Waking World/Doctor but being off somehow (shifting time signatures too) to try to show the different nature of her return. The scene for the piece ends when she goes all vampirey on Feferi.

Rejected alternate title: 'All the colours of the rainbow (are delicious)'

I saw the name Rainbow Rebirth and immediately wanted to do something cool with Kanaya and her fairly new rainbow drinker status, since I was pretty dang sure that was what the title was referencing. Since it was her care for the matriorb that led up to her transformation, I thought it made the most sense to include it, as well as rainbow colors, obviously, into this picture.